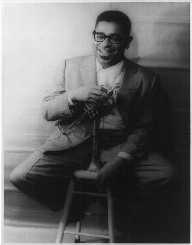 A Jazz composer and a renowned trumpeter, Dizzy Gillespie partnered with Charlie Parker and created a ‘bebop’ sound of music. He is famously known for his composed songs including ‘Groovin’ High,' ‘Salt Peanuts’ and ‘A Night in Tunisia.' He was one of the greatest American Jazz musicians of all times. Besides, Dizzy was an able trumpet player. Need I say more? His music still plays a significant role in the modern Jazz industry.

On October 21, 1917, John Birks Gillespie was also known as Dizzy Gillespie was born in Cheraw, South Carolina, the United States to Lottie and John Gillespie. He was the last child of nine siblings. Dizzy lived a panic kind of life. It was as if he was residing in a refugee country where he didn’t recognize what surrounded him at that point. Everything pointed out to his abusive and strict father, but the little lad grew up strong. At ten years old, Dizzy’s father died, and the family was left with nowhere to turn to. After few months, Birks’s English teacher introduced him to jazz, and in no time he joined the school band. He learned to play the trombone but later switched to play the trumpet. Over the next several years Dizzy joined local groups. Afterward, His family moved to Philadelphia, Pennsylvania.

In Philadelphia, Dizzy earned his nickname due to his unpredictable trait and humor. He joined a Frankie Fairfax band where he carried his beautiful trumpet in a paper bag. His fellow musician Bill Doggett called him ‘Dizzy.' He was then hired by Teddy Hill Orchestra where he toured Europe for some time. At 19 years old Dizzy became an American star. He was noticed for his great singles and trumpet playing. Before he left Europe, he recorded his first album with Teddy Hill Orchestra at ‘The Cotton Club Show.' He later joined the Cab Calloway Orchestra from 1939 to 1941.At Calloway, Dizzy played at the Cotton Club where he managed to tour regularly. During this period Birks continued to play his jam session at Monroe’s Uptown House. That is where he came to develop his musical style and knowledge.

In 1942 Dizzy teamed up with Hines Band, and Charlie Parker joined him afterward. Although Charlie was known for his alto saxophonist play, he played tenor sax at that time. Both first met in Kansas City. However, the band separated. In 1943 a small part combined thoughts and they formed a new band, Eckstine that Billy Eckstein was a leader. Dizzy was chosen as a music director where he landed a job at 52nd Street.

In 1974 Gillespie formed his new band Onyx Club on 52ndss Street. He played a different style of jazz that was known as ‘bebop.' His new form of the song earned him several awards and recognition. He became the talk of the town and increased his night jam sessions. The launch of the Onyx Club established the birth of the bebop phase.

In 1944 Dizzy earned the New Star Award from the Esquire magazine. At 72 years old Gillespie received a Lifetime Achievement Award and the National Media Awards by President George Bush. His new style of jazz had several standards of new chords, pop tunes, and melodies. His breakthrough came when he represented his band at the Massey Hall in Toronto. He then went to perform at Max Roach concert. A jazz legend Charles Mingus professionally recorded his songs, and they were later released on Debut Records.

In 1989, Dizzy traveled to and from and managed to give 300 performances in 27 countries. He mostly appeared in U.S and District of Columbia. He also headlined three TV shows and recorded two of his albums. In 1990 a hundred anniversary of American jazz was held at the Kennedy Centre for the Performing Arts Ceremonies. Later on, Gillespie received the Fifty Years of Achievements Awards.

On May 1940 Dizzy Gillespie married the love of her life Lorraine Willis. Dizzy had an out of wedlock relation with Connie Bryson, and he had a daughter called Jeanie Bryson. In 1968 Dizzy converted his faith from being a Christian to Baha’i’. The drastic change made him accept his African heritage. Gillespie died on January 6, 1993, in Englewood, New Jersey due to pancreatic cancer.