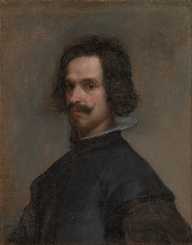 Spanish painter Diego Rodriguez de Silva y Velazquez was born in Seville, Andalucia. He was the first of his parent’s children. His exact date of birth is not known, but he was baptized soon after, on June 6, 1599.

His parents educated Velazquez, and later received proper training in languages and philosophy. His parents taught him to fear God. Diego was influenced by many artists and showed early talent. He began to study under Francisco de Herrera, with whom he stayed for one year. Velazquez was only 12 years old at the time. Afterwards, he began serving as the apprentice under Francisco Pacheco - an artist in Seville, with whom he stayed for five years.

By the time Diego Velazquez was 20 years old, he already had established an excellent reputation in Seville. He was known for his amusing scenes, like Old Woman Frying Eggs and more religious subjects, like The Adoration of the Magi.

In 1922, Velazquez went to Madrid and introduced himself to the chaplain to the King, Don Juan de Fonseca. For him, Velazquez painted the portrait of poet Luis de Gongora. The same year, King’s favorite court painter died, and Velazquez was invited to come to the court. After doing some portraits, the King's painting was commissioned.

The King sat for Diego on August 16, 1623, and the portrait was completed in one day. It was probably only a sketch, but the King was satisfied and invited Velazquez to move to Madrid. He lived there for the rest of his life. For his services for the King, Velazquez was paid 20 ducats per month, plus medical attendance, lodgings, and payment for his future pictures.

In 1627, he won the competition for the best painters in Spain with the subject expulsion of the Moors. His painting was destroyed in a fire at the palace in 1734. In 1629 he painted the picture of Bacchus - The Triumph of Bacchus. This painting is one of the best examples of Velazquez early work. The same year, he went to Italy and spent the year and a half there. This trip had a lot of influence on his later style.

After returning from Italy, Diego Velazquez started to paint a lot of portraits of the prince and heir to the Spanish throne. Velazquez rarely signed his work, and the court archives only saved information about his most important works. Therefore, the correct amount of his works is not known.

One of the periods earliest and constant patrons of Velazquez was minister Olivares. The most notable of these is the full-length picture with Olivares wearing the order of Alcantara, and the other, his portrait on a horse.

Velazquez often accompanied king Phillip to his journeys to Aragon and was also present when he conquered Lerida. He then painted the equestrian portrait of the king leading his troops. Velazquez made a total of 40 portraits for Phillip.

The artist often painted portraits of other members of the court. He has painted the portrait of Philip’s first wife and their children. He also painted Don Baltasar Carlos in Buckingham Palace, Cavaliers, churchmen and the poet Francisco de Quevedo. He also painted several dwarfs with respect and sympathy, for example in the 1644 painting The Favorite.

His most excellent religious paintings from the time include Christ Crucified, depicting Christ immediately after death.

Diego Velazquez was trusted by the King to develop an academy of art in Spain. The country had a lot of pictures, but lacked statuary, therefore, he was sent to Italy to make some purchases. He was accompanied by his assistant Juan de Pareja, a slave trained by Velazquez.

Velazquez traveled to Malaga, Genoa, Milan, and Venice. He also visited Modena where he painted the duke. During his time in Italy, he also painted Pope Innocent X. At this point, Velazquez’s style was seen as manera abreviada for his bolder and sharper way of painting. Velazquez painted his assistant’s portrait which now resides in Metropolitan Museum of Art in New York. This work was most probably a warm-up before painting the Pope.

Diego Velazquez returned to Spain with around 300 pieces of sculpture, including 12 copies of the Medici lions. His collection was arranged and cataloged for the king. However, after Philips death, the artwork abhorrent to the Spanish church gradually disappeared. The King’s first wife had died, and he married for the second time. Their oldest daughter is the subject of 1656 painting Las Meninas. This painting is one of the best examples of European Baroque. In the painting, king and queen are hanging on the back wall, which ingeniously predicted the fall of the Spanish Empire.

Velazquez received the honorary Cross of Saint James of the Order of Santiago in 1659. The cross could only be obtained by proving that he had no Jewish or Moore ancestry. His occupation as a tradesman was justified since Velazquez worked for the kind and did not practice selling his work.

The only surviving female nude by Velazquez is La, Venus del Espejo. He escaped the censorship of Inquisition since he was working for the king. The two main patrons of art were the church and the court. While Velazquez was the favorite of the court, the church preferred Bartolome Esteban Murillo. His final works include Las Hilanderas (The Spinners) circa 1657, Infanta Margarita Teresa in a Blue Dress.

In 2009, one of Diego Velazquez originals was discovered. The Portrait of a Man was in the collection of Metropolitan Museum of Art, which had been associated with the followers of the artist. After the painting was cleaned and restored, it turned out that it is his original work.

A painting in Yale University Art Gallery was found, and it might belong to Velazquez, but Prado Museum has not made the judgment.

In 2011, a portrait found in a 19th-century painter Matthew Shepperson collection was a previously unknown work by Velazquez. The painting sold at auction for 3 million pounds.

Diego Velazquez was married in 1618 to Juana Pacheco, his teacher’s daughter. They had two daughters - Francisca de Silva Velazquez y Pacheco and Ignacia, who died in infancy. His wife and daughter are the only known family of Velazquez.

Through his daughter, Diego Velazquez’ descendants are believed to be the Marquesses of Monteleone, and through them several royalties of Europe - Queen Sofia of Spain, Queen Beatrix of the Netherlands, King Carl XVI Gustaf of Sweden, as well as Henri, Grand Duke of Luxembourg and Hans-Adam II, Prince of Liechtenstein.