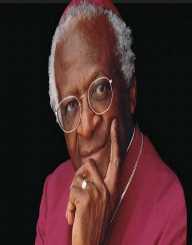 Desmond  Tutu is A South African is a retired Anglican Bishop and social right activist. Born on October 7, 1931, he gained worldwide fame for his strong opposition to the apartheid in South Africa with the likes of Nelson Mandela in the 1980s. Desmond Tutu became the first black bishop of the Church of the Province of Southern Africa currently the Anglican Church of Southern Africa and Archbishop of Cape Town. The renowned activist is currently into the fight against poverty, racism, homophobia, sexism, HIV/AIDS, and tuberculosis.

In 1984, Desmond Tutu was awarded the Nobel Peace Prize and had also won awards like the Albert Schweitzer Prize for Humanitarianism, 1986, Sydney Peace Prize, 1999, Gandhi Peace Prize, 2007 and the Presidential Medal of Freedom among several others.

Desmond Tutu was born to ZachariahZililo Tutu a teacher and Aletta Tutu a cook on October 7, 1931, in Klerksdorp, Transvaal.  Desmond Tutu  was the second child of his parents. at age twelve, the family moved to Johannesburg, where Desmond Tutu  met Trevor Huddleston, a parish priest in the black slum of Sophiatown. Desmond Tutu dreamed to become a doctor but since his parents could not afford it, he became a teacher. In 1951, Desmond Tutu  enrolled at the Pretoria Bantu Normal College and graduated in 1953.

After graduating from school, Desmond Tutu gained employment as a teacher at the Johannesburg Bantu High School and later at the Munsienville High School in Mogale City.  Desmond Tutu  got demotivated by the Bantu Education Act and therefore resigned in protest of the act, which gave less educational opportunities to the blacks in South Africa.  Desmond Tutu then chose a new career path in theology by enrolling at the St Peter’s Theological College in Rosettenville, Johannesburg. In December 1961, Desmond Tutu  was ordained as an Anglican priest. Desmond Tutu continued his education by enrolling at the King’s College, London in 1962 and graduated with his bachelor’s degree and master’s degree in theology in 1966.

During his studies, Desmond Tutu also worked as a part-time curate at St Alban’s Church, Golders Green and at the St Mary’s Church in Bletchingley, Surrey. In 1967, he returned to South Africa, where he became a chaplain at the University of Fort Hare.  Desmond Tutu also served as a lecturer at the National University of Lesotho from 1970 to 1972. He left for the UK in 1972, to receive anappointment as vice-director of the Theological Education Fund of the World Council Churches at Bromley in Kent. After working there for three years, Desmond Tutu  returned to South Africa in 1975 for an appointment as Dean of St Mary’s Cathedral in Johannesburg.

Desmond Tutu  was actively involved in the fight against apartheid in South Africa. He was involved in several protests including what became known as the Soweto riots against the then government’s use of Afrikaans as thecompulsorylanguage of instruction in black schools in 1976.  Desmond Tutu  also supported calls for economic boycott in the country, opposed Reagan administration’s “constructive engagement” policy in the United States, which called for "friendly persuasion".As a Bishop in Lesotho from 1976 to 1978, he became the Secretary-General of the South African Council of Churches.

Desmond Tutu  used his position to bring together all other churches in the fight against apartheid. Desmond Tutu called for the reconciliation of all parties involved in the apartheid through his writings and lectures both in South and abroad. Through his vigorous speeches and involvement, Desmond Tutu has his passport revoked twice by the then governments. Desmond Tutu  also suffered a brief jail term in 1980 after a protest march. Even though he was strongly against the apartheid, he shunned using the violent process to achieve the goals.

Desmond Tutu collaborated withProfessor Jake Gerwel, a former Vice-Chancellor of the University of the Western Cape to found the Desmond Desmond Tutu Educational Fund in 1990. This was aimed at funding developmental programmes in tertiary education. Desmond Tutu has served in positions including being appointed a patron of the World Campaign Against Military and Nuclear Collaboration with South Africa in 1994 and patron of the American Harmony Child Foundation and the Hospice Palliative Care Association (HPCA) of South Africa. Queen Elizabeth II, appointed him as Chaplain and Sub-Prelate of the Venerable Order of Saint John in 1995.

Desmond Tutu married Nomalizo Leah Shenxane on July 2, 1955. The couple had four children Trevor Thamsanqa, Theresa Thandeka, Naomi Nontombi and Mpho Andrea. Desmond Tutu was diagnosed with prostate cancer in 1997 and has since undergone successful treatment in the United States. This can be a reason why Desmond Tutu became a patron of the South African Prostate Cancer Foundation, established in 2007.

In 1984, Desmond Tutu was awarded the Nobel Peace Prize and received the Albert Schweitzer Prize for Humanitarianism in 1986. Desmond Tutu won other awards like the Pacem in Terris Award, 1987, Sydney Prize, 1999, Gandhi Prize in 2007 and the Presidential Medal of Freedom in 2009.