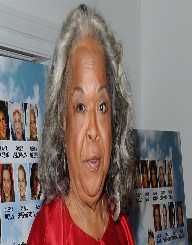 Della Reese is a TV personality and a well-known gospel singer. She has appeared on TV for some years and is widely recognized for her performance in Touched by an Angel. She has also been the host of a talk show and won several award nominations.

Della Reese was born on July 6, 1931. Her star sign is Cancer, and her birthplace is Detroit, Michigan. Her full name is Deloreese Patricia Early. Reese began singing at a church at a very early age of six. When she was 13, she got an opportunity of a lifetime by singing with the gospel legend Mahalia Jackson.

Della Reese holds a major in Psychology which she earned from the Wayne State University, Detroit. It was there that she formed a gospel group, Meditation Singers. Reese’s education came to a sudden halt when her mother died. With her father also ill, she became the bread-earner for the family and started on her music career.

Della Reese started her entertainment career as a musician. In 1950, she got an opportunity to work with the Erskine Hawkins Orchestra. Four years later, she was signed with Jubilee records. In 1957, Della Reese released And That Reminds Me, which went on to become a top hit.  She then signed with RCA and released Don’t You Know. The song went on to earn her a Grammy Award nomination. Soon, Reese got invitations to appear in several TV shows.

By the late 1960s, Della Reese was established as a gifted singer and a talented actress. She started her talk show named Della, which ran for a year. She also became the guest host of the Tonight Show – the first woman to do the show.

Her television appearances became more frequent after acting in Chico and the Man. She took on several comedy roles after that. IN 1994, she began playing an angel in Touched by an Angel – the role which she is most recognized for. Her acting brought her several award nominations.

Following the end of Touched by an Angel, she acted in films like Beauty Shop and Hallelujah. Della Reese is also an author who mainly writes about spirituality. One of her famous books is Metaphysically Speaking. She is also an ordained minister.

In her several-decades-long career, Della Reese has achieved some remarkable feats like being the first black woman to host her talk show.

Della Reese lost both her parents early. This affected her studies, but also made her a strong woman. She was briefly married to a factory worker named Vermont Adolphus Bon Taliaferro around 1952. On December 28, 1959, she married Leroy Basil Gray, Gray had a previous marriage without proper divorce, and so this marriage was annulled.

She is a very close friend of actress Roma Downey. Reese has type-2 diabetes and has retired from acting.