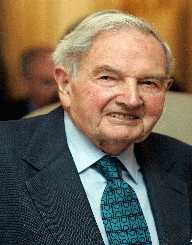 Former American banker David Rockefeller was born on June 12, 1915, in New York City. Rockefeller grew up in an eight-story house at 10 West 54th Street, which was at the time the tallest private residence ever built. His father John was a financier and his mother Abigail, a socialite.

His grandfather was the co-founder of Standard Oil. David was the youngest of family’s six children. He spent a lot of time at the family estate in Kykuit, where he met many of his father’s associates.

During his time in London, Rockefeller worked in a branch of Chase Manhattan Bank. After returning to the United States, he continued to study and in 1940 received a Ph.D. from University of Chicago. After finishing his studies, Rockefeller took a job as a secretary to New York Mayor Fiorello La Guardia. After World War II started, Rockefeller enlisted in the army and served in North Africa and France, eventually getting a promotion to captain.

In 1946 David Rockefeller joined the Chase National Bank staff as assistant manager to the foreign department. The bank was at the time associated with several prominent institutions, like General Electric and the oil industry. The bank is now called JPMorgan Chase.

As assistant manager, he financed international trade in various commodities, like coffee and metals. He was also maintaining relationships with more than 1000 correspondent banks. He served in different positions at the bank and in 1960 became the president. In 1969 he became Chairman and Chief Executive, until 1980.

David Rockefeller became the chairman of the committee that was deciding on the location of the new bank’s headquarters in 1954. He decided on locating the new building in Wall Street area, reviving the City’s financial district. In 1960 the 60-story construction was complete, becoming the largest bank building in the world. In 1960 he along with other people in business formed the Chase International Advisory Committee, becoming the chairman until 1999.

During David Rockefeller's term as the CEO, the Bank spread internationally, with a global network of estimated 50, 000 banks- most extensive of any bank in the world. Chase bank also established the first branch of an American bank in Moscow and traveled to China, which resulted in Chase becoming the first correspondent bank of the National Bank of China.

David Rockefeller has met and advised every president since Eisenhower. President Jimmy Carter offered him the position of United States Secretary of Treasury and Federal Reserve Chairman, but he declined. Rockefeller has always preferred a private role but has helped to bridge various interests with the leaders of the world, including Saddam Hussein and Mikhail Gorbachev.

Rockefeller has many connections in the political world. In 1954, he met Henry Kissinger with who he had a similar perspective, both on international and domestic issues. Kissinger was also on the board of the Rockefeller Brothers Fund. Rockefeller even consulted him on various business ventures, for example on Chase Bank entering Chile.

David Rockefeller also has connections in the CIA, since Allan Dulles and his brother John Foster Dulles are family in-laws. After Pearl Harbor, Dulles set up his operation center at Rockefeller center.

Besides his work at the Chase Bank, David Rockefeller has also taken a more active role in his family’s business, after the World War II ended. He and his brothers often had meetings to discuss their business ventures of common interests. He also made sure that his cousins become involved with the family’s institutions.

In 2000 Rockefeller made the final sale of Rockefeller Center to Tishman Speyer Properties. Rockefeller and his family have always been devoted philanthropists. In 2005, he donated $100 million to Museum of Modern Art and the same amount to Rockefeller University. Upon his death, Rockefeller Brothers Fund will receive $225 million to be used for creating David Rockefeller Global Development Fund, to support access to health care, fight poverty and promote sustainable development.

New York Times established that over his lifetime, Rockefeller had donated more than $900 million to various charities. In 2002 he published his book Memoirs, being the only member of the family to have written an autobiography.

In 1940, David Rockefeller married Margaret “Peggy” McGrath. She was the daughter of a partner in a prominent Wall Street law firm. The couple had six children- David Jr., Abigail Aldrich, Neva, Margaret Dulany, Richard Gilder and Eileen. All children participate in many of the family’s businesses. David Jr. is the vice chairman of Rockefeller Family & Associates, chairman of Rockefeller Financial Services and many other family institutions.

Rockefellers' daughter Abigail is the most rebellious of all children. She was drawn to Marxism and was an admirer of Fidel Castro. She was also a radical feminist, environmentalist, and ecologist. Richard Gilder Rockefeller is a physician and chairman of the United States advisory board for Doctors Without Borders.

In November 2016, Rockefeller's wealth was established to be the US $ 3.1 billion making him one of the 200 wealthiest people in the world. His wealth initially came from his father’s trust funds, but later from the Standard Oil and various real estate developments. Another source of income is the expansive art collection, which he developed through his mothers and two other associate establishments of the Museum of Modern Art.

Rockefeller died on March 20, 2017. Throughout his lifetime, he has received various awards, the highest among them being the Presidential Medal of Freedom. He was also the honorary chairman of Council for Foreign Relations, founder and honorary chairman of the Americas Society. He was also the founder of Council of the Americas and the Trilateral Commission. Rockefeller was the only member of the Member Advisory Group of the Bilderberg Meetings- a yearly conference for the elite politicians of Europe and USA.