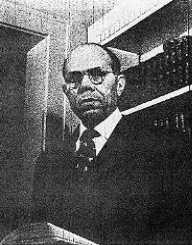 David Nelson Crosthwait Jr. was an African American mechanical engineer and inventor of several heating devices. He patented over 100 inventions in the US and Europe.

David Nelson Crosthwait Jr. was born in Nashville on May 27, 1898. He was brought up in Kansas City. He displayed an early liking for mechanical and scientific topics. His teachers encouraged his passion for innovating and creating things. He got good grades in junior school. Despite that, Crosthwait was denied entry in the elite schools within the city for being black. He went to an African American secluded high school. He graduated from high school and enrolled in college. He studied mechanical engineering at Purdue University on a fully secured scholarship. He graduated in 1913 as the top student in the graduating class. In 1920 he earned his Master degree in Mechanical Engineering from the same university. Crosthwait got an honorary degree in 1975.

He got employed at the C.A. Dunham Company. The company changed its name to Dunham-Bush, Inc. He moved to Iowa. In Dunham, he worked in several capacities. He ultimately became the director of Research. Crosthwait worked extensively on heating systems. He designed and installed heating and steaming machines and other systems. In his junior capacity, he helped in the diagnosis of the malfunctioning of the faulty machines and equipment.

He was promoted to the role of supervisor at the workshop. Crosthwait enhanced his influence on the researching field within the institution. He spent more time leading the team and studying new working formulas. Until now, he majored in the study of the heating systems. He became a vital component within the company for his innovative mind. He was promoted to the director of research in the mechanical department.

As the head of the research center, Crosthwait expanded the innovative scope to include steaming machines. He majored in heating and steaming systems for the market. He invented customized heating systems for the American public. Crosthwait was commissioned to design and fit a heating and cooling system at the Rockefeller Center. He received another contract to mount a heating system in the Radio City Music Hal in New York City.

The commissions to fit heating systems for the two institutions in New York opened the world of opportunities. He started getting offers from the US and Europe. He expanded his research to include other mechanical devices according to customer specifications. He improved the refrigeration systems of clients by moderating the thermal regulators. He worked on dry and wet vacuum cleaning machines for domestic users. He invented the industrial vacuum cleaner for large corporations. Crosthwait invented temperature regulating machines. He restored the warmth in houses during winter and regulated the heat during the summers.

Crosthwait became a household name in the US. He continued working on other inventions during his lifetime. Crosthwait was popular for his unique working relationship with his clientele. He encouraged his colleagues to work on creating solutions to customer problems. On his part, he created custom made solutions to specific problems of the clients. He became well versed with different mechanical systems beating the rest of his peers in the industry. He expanded his market reach to Europe.

In 1969, he resigned from employment and returned to lecture at his alma mater Purdue University. He was awarded an honorary doctorate by the university in 1975 for his input at the college.

He advanced his knowledge by sharing his mind with others. Crosthwait wrote books and articled concerning the field of mechanical innovations. He was quoted in numerous academic articles and forums for his unique in-depth knowledge of the research and innovations.

He became a member of the American Society of Heating and Ventilation Engineers Guide. He contributed to columns and editions of the manual in successive years. He belonged to other organizations of scientific inclinations. He served as a member and president of the Michigan City Redevelopment Committee.

For his efforts in the field, he was recognized on numerous occasions. He was honored by the National Technological Association. He received a medal of honor from the organization in the 1930s. In 1971, he became an honorary member of the American Society of Heating, Refrigeration and Air Conditioning Engineers. Crosthwait was the first African American to be a full member of the organization.

David Nelson Crosthwait Jr. died on February 25, 1976, in West Lafayette in Indiana. He was 78 years old. He was born in poverty and racial segregation. He faced prejudice for his disadvantaged background.

Nevertheless, Crosthwait was a gifted child. He worked over his disadvantaged beginnings to emerge as the early African American pioneers in the field of science and innovations. In helping the society, he returned to his former university to impart his knowledge to the next crop of scientific innovators.  Decades after his death, Crosthwait still interacts with our lives through his inventions.