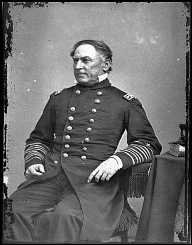 David Glasgow Farragut was born on July 5, 1801, at Lowe’s Ferry on the Holston River in Tennessee. His mother Elizabeth was a native of North Carolina, but his father Jordi was from Minorca, Spain. His father operated the ferry and served as a cavalry officer in the Tennessee militia. His father fought for the American Revolutionary cause and changed his name to George.

In 1805, George accepted to be positioned in New Orleans and moved his family there. They embarked on a 1,700-mile flatboat adventure. His mother died in 1808 from yellow fever, and afterwards his father made plans to place the children with friends and family. David Farragut was set to live with a naval officer David Porter who was a friend of his father’s. His foster father came from a naval family.

David Farragut began his naval job working as a midshipman when he was just nine years old. By the age of 12, he had become a prize master and fought in the War of 1812, where he served under Captain David Porter. Farragut participated in the capture of HMS Alert and helped to establish America’s first naval base and colony in the Pacific- Fort Madison. In 1812, Farragut was assigned for a journey to bring a ship captured by Essex safely to port.

In 1822, David Farragut became a lieutenant during the campaigns against West Indian pirates. In 1824, he became the commander of USS Ferret in the Mosquito Fleet, marking his first command of a U.S. naval vessel. However, when he learned that his old captain Commodore Porter would command the fleet, he asked and was allowed to serve aboard one of the smaller vessels Greyhound. Over the next six months, the fleet drove the pirates off the sea.

In 1847, David Farragut became the commander of USS Saratoga and was assigned to the Home Squadron to serve in the Mexican-American War. Upon arriving in Veracruz, Mexico, Farragut was ordered to sail the ship to the north blockade Tuxpan. During the voyage, there was a massive outbreak of yellow fever on the board. The ship returned to Pensacola, Florida in January 1848 to restore the supplies and get the ill crew members to the hospital. The ship sailed to New York and was decommissioned in February that year.

Just before the break out of Civil War, David Farragut moved to a small town outside of New York. As the war began, he joined the Union and was given a seat on the Naval Retirement Board. However, his foster brother David Porter offered him an assignment to command an attack of Norfolk. He hesitated at first since many of his friends and family still lived there, but later his target was changed to New Orleans, and Farragut accepted the job.

David commanded the Gulf Blockading Squadron on the USS Hartford with a 17 ship fleet. The fleet set sail on February 3, 1862. On April 18, a massive bombarding of the forts began, and the city port of New Orleans was taken ten days later.

David Farragut's achievement made a tremendous difference in the war and Farragut was honored with a rank of rear admiral, which was never before used in U.S. Navy. He also participated in defending Vicksburg, Mississippi. However, after only two ships were left in his fleet, Farragut was forced to retreat. When Vicksburg surrendered on July 4, 1863, which meant that the Union acquired the centerpiece for their winning strategy.

After the Civil War, Farragut was assigned to the Military Order of the Loyal Legion of the United States and served as the commander of the Commandery of New York. In 1866, he was promoted to full admiral, becoming the first U.S. Naval officer with that rank.

David Farragut married Susan Caroline Marchant in 1824 when he was just appointed to USS Ferret. She had poor health and died in 1840. After her death, Farragut married again to Virginia Dorcas Loyall in 1843. The couple had one surviving son.

Farragut died at the age of 69 from a heart attack. He was at the time on a vacation in New Hampshire.