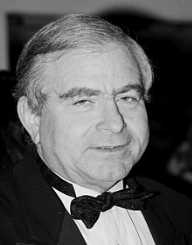 David Berger was an American lawyer known for his class-action lawsuits.

David Berger was born on September 6, 1912, in the borough of Archbald, Pennsylvania, Philadelphia. His father was Jonas Berger and his mother was Anna Berger. They were Jewish peddlers that had emigrated from Austria. He had a sister named Rose and four brothers, named Ellis, Norman, Joseph, and Harold.

David Berger attended the University of Pennsylvania Law School, graduating in 1936. He was at the top of his class and earned the Order of the Coif.

After graduating, David Berger served as an assistant to the dean of the University of Pennsylvania Law School. He then started working as a clerk for the Pennsylvania Supreme Court. After that, he briefly worked as a clerk for the U. S. Court of Appeals for the Third Circuit. He then paused his career to serve in the U. S. Navy during World War II. He served on ships in the South Pacific, reaching the rank of Commander and earning the Silver Star.

After returning from the war, Berger became a trial lawyer. He joined the International Academy of Trial Lawyers, the American College of Trial Lawyers, the American Law Institute, the International Society of Barristers, and the Judicial Conference of the Third Circuit. Mayor Richardson Dilworth appointed him to the position of city solicitor in 1956. He helped develop the Southeastern Pennsylvania Transit Authority. President Kennedy made him a part of a committee that developed rail lines in the Northeast Corridor.

In 1963, David Berger left his public office and returned to private law. He formed the law firm Berger & Montague with his partner Laddie Montague. He began to work on class-action lawsuits, allowing a group of people to sue one party together. He was one of the first lawyers in the U. S. to work on these types of cases. In 1971, he represented several service station operators in their fight against major oil companies. He worked with the shareholders of the corrupt Penn Central Railroad. He also represented the residents of Three Mile Island after the 1979 nuclear accident. He fought against many major companies, improving the conditions of both their employees and their consumers.

David Berger's first wife was Harriet Fleisher. They had two sons, named Jonathan and Daniel. After divorcing his first wife, he began a relationship with socialite Barbara Wainscott. They got married in 1997 and their wedding was attended by Prince Philip and Prince Edward of England.

David Berger died of pneumonia on February 22, 2007, in his home in Palm Beach, Florida. He was 94 years old. He was buried at the Jewish Cemetery in Dalton, Philadelphia.