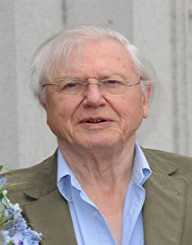 In 1936 David and older brother Richard attended a lecture by Archibald Belaney at De Montfort Hall. His advocacy of conservation influenced David. David attended Wyggeston Grammar School for Boys. In 1945, Clare College of Cambridge University offered him a scholarship, which he graduated with a degree in natural sciences, studying geology and zoology. He was called up for national service in the Royal Navy in 1947 and spent two years stationed in North Wales and the Firth of Forth.

David Attenborough married in 1950, to Jane Elizabeth Ebsworth Oriel. Together they had two children: Robert (retired lecturer in bioanthropology) and Susan, a former primary school headmistress. Jane passed away in 1997 of a brain hemorrhage. David considers himself agnostic.

After the stint in the Navy, David Attenborough became an editor, editing children's science textbooks for a publishing company. In 1950, he was rejected for the position as a radio talk producer but was offered a training program. Two years later, he joined BBC full time, becoming a producer for the Talks department, he handled non- fiction broadcast such as quiz shows Animal, Vegetable, Mineral? and Song Hunter. David Attenborough was 24 years old when he joined BBC, and not many Britons owned a television, including him. David and his teammate had to invent the visual language of television as they went along, as they were still pioneers of television.

Sir David Attenborough uses VHS when writing scripts for footages for his show, he explained that it is easier to go backward and forward. BBC still keeps a cassette player, converting the digital file to analog for David to add voiceovers in. He was offered a department: BBC Natural History Unit’s productions in 1957, but he declined in favor of staying home in London. Instead, he formed the Travel and Exploration Unit.

Through his new unit, David Attenborough first produced Animal Patterns; it was a three part series that was presented by Jack Lester. When Jack fell ill during the broadcast of Zoo Quest in 1954, David had to fill in and present the episodes. In 1965, he became the controller of BBC Two, he included a clause that would allow him to continue making programmes on an occasional basis.

With BBC Two, David diversified the programs, adding music to natural history, forming an eclectic combination such as Man Alive, and Monty Python's Flying Circus and The Money Programme. BBC Two was the first British channel to broadcast in colour in 1967, as David introduced televised snooker, he also brought rugby league via the BBC2 Floodlit Trophy.

Sir David Attenborough's other famous projects include a 13-part series on the history of Western art and Civilisation in 1969. He was promoted to director of programmes, but he left the job in favor of broadcasting in 1973.

David Attenborough’s 1973 series Eastwards with Attenborough, was similar to the Zoo Quests, but without the animal-collecting element. He presented the Tribal Eye and The Explorers while securing co-production deal with Turner Broadcasting to produce Life on Earth in 1976.

Since then, David has been presenting Life series, a ten part series featuring plant and animals. Most of his presentations feature the animal behavior, documentaries, and environments. In 2010, he was in partnership with Sky, working on documentaries for the new 3D network, Sky 3D. Their collaborations are Flying Monsters 3D and The Bachelor King 3D.

Sir David Attenborough is still presenting his show, with the most recent Planet Earth II, his career spans over seventy years. He is not planning to stop presenting his projects at the moment. He also published twenty- five books that are linked with the series that he broadcasted in his time.

David Attenborough worked with WWF, Peter Rose and Anne Conlon from 1983. The Yanomamo was about the rainforest, and Ocean World was presented in 1991. He narrated both musicals. He was appointed patron of UK's Blood Pressure Association in 2005.  In 2009, David became a patron of Population Matters (formerly known as the Optimum Population Trust) and Friends of Richmond Park.

He supports many environmentalist charities, such as  World Land Trust, Butterfly Conservation and president of Leicestershire and Rutland Wildlife Trust. In 2003, David launched ARKive, an initiative of Wildscreen. The project is to gather natural history media into a digital library.

David Attenborough and other top scientists campaign for "creationism to be banned from the school science curriculum and for evolution to be taught more widely in schools.". His view is that evolution is as solid a historical fact, and strongly opposes creationism and its offshoot "intelligent design."

David Attenborough has 32 honorary titles from various British Universities. He has at least fifteen newly discovered species and fossils, and one genus being named in his honour.

He was knighted in 1985 and has around 32 different awards. David Attenborough remains the only person to have won a BAFTA in black and white, colour, HD, and 3D. He was also awarded the Michael Faraday Prize by the Royal Society, the Descartes Prize for Outstanding Science Communication Actions, and the Order of Merit (OM). He got the Commander of the Royal Victorian Order (CVO) for producing Queen Elizabeth II's Christmas broadcast in 1991.