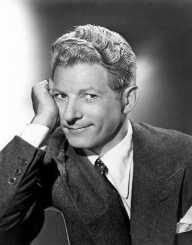 David Daniel Kaminsky was born on 18th January 1911, to Jacob and Clara Kaminski. He had two older brothers, Larry and Mac.  Kaye’s family emigrated to the United States in 1909, from Ukraine. Kaye was the only one of his family born in the U.S. He was born in Brooklyn, New York. His father worked as a tailor.

Danny Kaye went to Public School 149 in Brooklyn, which has since been named in his honor. He then went to high school at Thomas Jefferson High School but dropped out. Around the same time, his mother died. Soon after her death, Kaye ran away to Florida with one of his friends. They had dreams of becoming successful street performers but didn’t make it. They eventually returned home to New York.

Danny Kaye was fortunate that he had an understanding father, who encouraged Kaye to pursue his dreams instead of making him go back to school. He tried several jobs, getting sacked from most of them before he decided to have another go at being a performer.

Danny Kaye’s big break came in 1933 when he was invited to join the “Three Terpsichoreans,” which was a vaudeville dance act. During this period, he changed his name to Danny Kaye. The act toured Asia in 1934, but when Kaye arrived back in the U.S., he found it difficult to get bookings.

In 1935, Kaye made his film debut in Moon Over Manhattan which was a short comedy movie. He was then signed by Educational Pictures to do a series of comedies. They were low-budget short movies, but when the studio shut down unexpectedly in 1938, the work stopped.

Danny Kaye moved on to a Broadway show called, Straw Hat Revue. The pianist and composer for the show was Sylvia Fine, who would later become his wife. Although the show didn’t last long, it did come to the attention of the critics, and both Kaye and Sylvia were offered work at a nightclub in New York City.

Danny Kaye was then cast in a Broadway comedy called Lady in the Dark. From Broadway, he went to film, and his first feature film debuted in 1944 – it was the comedy Up in Arms.

Danny Kaye then had his radio program for two seasons in 1945 and 1946. The show was called The Danny Kaye Show. Kaye left his radio show to do a tour for the military, after the end of World War II.

Danny Kaye worked prolifically, particularly through the 1940s and 1950s. He did over 20 movies, including classics such as The Secret Life of Walter Mitty, and White Christmas, which also starred Bing Crosby.

Danny Kaye recorded various studio albums, as well as soundtracks. He was also in 18 television shows, sometimes as a guest. Kaye did have his show, The Danny Kay Show, from 1963 to 1967.

As his career began to wane, Danny Kaye became more and more involved in his charitable work. He also spent a lot more time cooking and would entertain at home, which he loved doing.

Danny Kaye won many awards and honors. As well as winning two Golden Globes and being given three stars on the Hollywood Walk of Fame, he was also honored with the following:

Danny Kaye married Sylvia Fine in 1940 and was still with her in 1987 when he died. They had a daughter, Dena. The couple did become estranged around 1947, but they never divorced.

Danny Kaye worked with UNICEF for many years. He was their first ambassador-at-large. When UNICEF was awarded a Nobel Peace Prize, Kaye was asked to accept it.

As well as his tireless work for UNICEF, Kaye also has the Danny Kaye and Sylvia Fine Kaye Foundation. His daughter, Dena, is the president and is dedicated to continuing the legacy of her father in helping people all over the world.