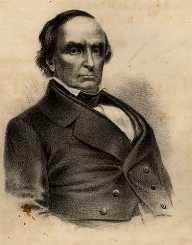 American politician and orator Daniel Webster was born in Salisbury, New Hampshire on the 18 January 1782 into a large family.  His father Ebenezer Webster was a tavern-keeper, veteran of the American Revolution and a prominent figure in New Hampshire. His mother was Abigail Webster.

He was a pupil at the Phillips Exeter Academy and Dartmouth College. During his time at college, his gift for oratory became apparent. After high school graduation, he was articled to a law firm in Boston.

Initially, Webster practiced law in his hometown and later relocated to Portsmouth where he represented the shipowners and merchants of the area. He became known when he opposed the Jefferson administration’s trade embargo as unconstitutional and the 1812 declaration of war against Britain.

In 1812, Webster was elected to the House of Representatives as a member of the pro-British Federalist Party which was pro-commerce and centralized government. He won re-election in 1814 and 1816. During his time in office, he was anti-war and voted against a conscription bill.

He relocated to Boston in 1816 and represented local business interests where he became one of the most highly paid lawyers in the US. In 1820 Webster was a delegate at the Massachusetts Constitutional Convention where he spoke out against universal suffrage. During the early 1930s, he opposed Andrew Jackson’s economic policies.
As a member of the Whig Party, he was involved in the running the office of the President in 1836.

In 1841, Webster served as the Secretary of State and was involved in the resolution of the Caroline Affair when he helped draw up the Webster-Ashburton Treaty. He left politics in 1843 but returned in 1845 when he was elected to the Senate. During his term, he opposed the Mexican-American War as well as the Texas Annexation. At the beginning of the 1850s, he left the Senate and was appointed Secretary of State, under President Millard Fillmore.

His first wife was Grace Fletcher whom he married in 1807. They had five children together. After the death of Fletcher in 1827, he married Caroline Le Roy. Daniel Webster died on the 24 October 1852 in Marshfield, Massachusetts.