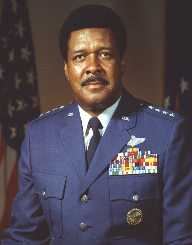 Daniel James Jr. was born in Pensacola, Florida in 1920, His family home was close to Pensacola Naval Air Station, and as a young man, he was determined to become a pilot. His mother, an educator, installed self-confidence in her African American pupils, encouraged them to fight racial prejudice and to reach their full potential.

James earned a place in the Tuskegee Institute of Alabama where he excelled as an athlete and also showed leadership skills. In 1939, he joined a flight training programme and earned his wings, becoming of the Tuskegee Airmen, the US Air Corps first black pilots who went on to gain legendary status.

James saw action as a pilot in the Korean War as well as 78 missions in North Vietnam.
He rose to the rank of vice commander of the 33rd Tactical Fighter Wing at the US Elgin Air Force Base in Florida. Between 1969-1970, he was in command of the 7272nd Flying Training Wing at a US base in Libya.

In 1970 James was made a brigadier general and was stationed at the Pentagon Public Affairs Office. He rose in the ranks to become a lieutenant general in 1973 and a four-star star general in 1975.  He was then commander-in-chief of North American Air Defense and retired from the military in 1978.

James was the first African American man to become a four-star general in the US Armed Forces.

He married Dorothy Watkins (1942) in Tuskegee, Macon County, Alabama and the couple had two sons and a daughter. Daniel James Jr. retired in 1978 and shortly afterward, died from a heart attack in 1978, shortly after his retirement.