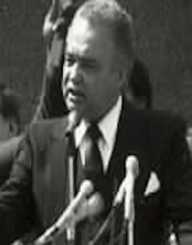 Coleman Young was born Coleman Alexander Young in 1918 in Alabama in the United States. He became one of the leading figures in the civil rights movement and the politics of his time.

Coleman Alexander Young was the oldest of the five children in the family. He had a difficult childhood. This was due to racism and social inequalities of the south of the United States. At the age of 5, his family moved to Detroit. His parents hoped to give the children a better life that was not forthcoming in Alabama. His early education was in public schools.

The college scholarship he got only catered for tuition. This meant he had to provide for his living in college. He then turned to the Eastern High alumni fraternity for assistance. Since he was black, he was denied the financial help by the Eastern High alumni. The offer was generously extended to the white students from the same graduating class.

Coleman Young then opted to join the workforce at Detroit Ford Motor Company. He was employed as a trainee electrician in the assembly line. He was an ardent disciple of human rights and equality.

Coleman found himself intensively involved in the labor rights movement at his new workplace. His activities of championing the working rights of black workers earned him pariah identity.

This led to his dismissal at the assembly line. But the dismissal never dampened his resolve. He continued his involvement with other labor rights organizers in Detroit. The Federal Bureau of Investigation in Detroit opened an investigation file on his activities.

Coleman Young was dismissed from the army during the Second World War. After leaving the army, Coleman returned to his passion in Detroit. He became the chief of organization for the Congress for Industrial Organizations. He was again to be expelled from the industry in 1948. The head of the United Auto Workers considered his views extremely radical.

Coleman Young joined active politics in the early 1960s. He was elected State Senator of Detroit in 1964. He was the first Black to be nominated to the Democratic National Committee four years later. In 1973, Coleman was elected the first black Mayor of the City of Detroit.

He was to be elected five times in his career. A record 20 years serving in elective public office until 1997. During his first two terms, he managed to keep improving the economy.

He convinced a majority of workers to take pay cuts on their salaries. Despite being pro-equality, the differences between black neighborhoods and the white suburbs were glaring. The black communities were leaving in poor, unsafe areas. While the whites were leaving in affluent and well secure suburbs.

As Mayor, Coleman Young took office when Detroit was virtually bankrupt. This was due to the flight of the white businesses out of town. The city was also gravely racially segregated. He transformed the police force through racial integration and upholding professionalism. This effort is substantially reducing the crime rate figures in Detroit. This earned the Detroit police national fame.

In rescuing the economy, Coleman managed to bring back automaker Ford back to Detroit. Other, auto giants like both General Motors and Chrysler followed in building new factories. This created much-needed jobs.

Coleman Young also addressed the inequitable division of resources. Women and young blacks were given priority in the awarding of City contracts. This spurred the economic revamp of the black community in Detroit. This managed to equalize the years of economic segregation.

Coleman Young left hope to many marginalized poor people in the US. His life showed how determination could bear fruits. Anyone can dream and make a positive contribution to the community around them. Examples are athlete Muhammad Ali and former President Barack Hussein Obama. They came from poor backgrounds.

They managed to rise in their respective careers to be among world beaters. He also left behind the Coleman Alexander Young Foundation. It helps young people to access meaningful education. It provides mentorship and needed finances to the college-going young in Detroit. This opportunity is open to all. It does not discriminate on any race, religion, stature, gender or nationality.

As a public figure, Coleman Young attracted both praise and hate in equal measures. He was close to President Henry Ford. He presented his economic plan to the government. The president rejected his proposal.

Coleman Young had hoped for President Ford’s support in his Detroit economic plan. President Ford was from Michigan, a state where Detroit is the state capital. An astute politician and community organizer, Coleman had a difficult family life.

He got married and divorced twice. This exposed his tumultuous family life. He was also twice investigated by the federal police during his third term in office. This was due to his aggressive black business empowerment drive. He was seen to be biased towards the black community. Though there was no prosecution case opened on him.

It is necessary to find and fulfill your cause in life. It is the greatest gift one can give to society. Life never gives us the perfect start. One has to make do with what life throws at you. Many people can relate to the early childhood life of Coleman Young had to undergo.

It takes a burning desire to achieve what is right for society. With this desire, all the setbacks in life become small challenges. Like Coleman, we can rise above the obstacles engraved in our systems and mindset.

Then everything we dream to do is possible. It will take a lot of time, resources, tears and sometimes even death. But you will achieve the ideals you imagine of. Coleman’s resolve to fight the racial prejudices made him rise above his peers. He became one of the most sung heroes of the civil rights movement.