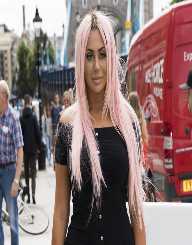 Chloe Etherington best known as Chloe Ferry is a British reality television personality and a social media star. Born on 31st August 1995, she gained prominence as a cast in the MTV reality series, Geordie Shore. Chloe Ferry who started a career as a club hostess finally got a bit of celebrity status with the Geordie Shore. In 2017, she participated in the nineteenth series of Celebrity Big Brother.

Chloe Ferry made a guest appearance on Sun, Sex, and Suspicious Parents in 2015 and in the Release the Hound on March 16, 2017. The 23-year-old beautiful and classy lady has also got a lot of followers on social media.

Chloe Ferry was born on 31st August 1995, in England. Her family education and other details are not in public. Nonetheless, she had an interest in her childhood days and joined a dance school to perfect her skills. As she grew, she dumped dancing, went into sports, and practiced gymnastics.

She also competed in various sports, became a national skater, and did very well in that field. Chloe’s taste for and interest in other fields took her into acting. She was introduced to reality TV after she met Scotty Timlin.

Chloe Ferry started a career as nightclub hostess where she built links and got a good sense of fashion. She made her first television appearance in an episode of Sun, Sex and Suspicious Parents on June 30, 2015. Two years afterward, her links with Scotty Timlin proved fruitful as she got her a slot as a cast in Geordie Shore.

She was finally announced as a cast of the series on February 17, 2015, and made a debut in the tenth series. She joined the nineteenth series of the Celebrity Big Brother on January 13, 2017, but was evicted only a week later. Her presence in Geordie Shore gained her popularity and instant fame.

On social media, her followers increased especially on Instagram where he sexy and semi-nude photos gained her over 2.2 million followers. Though she has faced many criticisms with some of her photos, the young and sexy Chloe seems not to be perturbed. She does what she loves in the best way she could. She also has a strong presence on Twitter, Facebook, and Snapchat.

Chloe Ferry has undergone the knife to enhance her beauty. Plastic surgery has been a common practice among celebrities and public figures who want to have a flawless appearance. Chloe’s plastic surgeries are very visible especially to those who knew her growing up. She has worked on hips to get voluptuous curves and a pointed nose. Her new appearance came as a shock to most of her fans.

Chloe Ferry in an interview with OK! Confirmed she has worked on her body, had her eyebrow lifted, lip filler and got cheek fillers. She also plans to enhance her body further to do away with any form of deformities. She confidently flaunts her body despite all criticisms, and it seems her fans love her for that.

Chloe Ferry has been doing better in all aspects of her life but love. Her relationship has been faced with several challenges, and her love story with DJ Sam Scott fell flat.