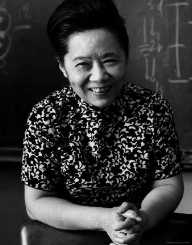 Chien-Shiung Wu was born on May 31, 1912. She was a Chinese American physicist. She contributed a lot to the field of nuclear physics. Wu worked on the Manhattan Project helping in the development of the process for separating uranium metal into uranium-235 and uranium-238 isotopes by gaseous diffusion. She conducted the Wu experiment which contradicted the hypothetical law of conservation of parity. The experiment earned her the inaugural Wolf Prize in Physics. She died on February 16, 1997, at the age of eighty-four.

Chien-Shiung Wu was born on May 31, 1912, in Liuhe in China. She grew up alongside two siblings. She was born to Wu Zhong-Yi and Fan Fu-Hua. Her father greatly supported her education by availing anything she needed to improve herself. Wu attended Ming De School for her elementary education. In 1923, she left her hometown to study at Suzhou Women’s Normal School No. 2.

In 1929, she graduated from the school at the top of her class. She later joined the National Central University in Nanjing where she started by studying mathematics but then switched to physics. After graduating from the school, she did a graduate-level study in physics at the Zhejiang University. She was also an assistant at the institution.

Wu later became a researcher at the Institute of Physics of the Academia Sinica. She was supervised by Professor Gu Jing-Wei. Wu later applied to the University of Michigan, and she was accepted. Her uncle funded her education there. In 1936, she traveled to the United States to begin her studies with her friend Dong Ruo Fen, a chemist.

After reaching San Francisco, Chien-Shiung Wu changed her mind and chose to pursue her graduate study at the University of California in Berkeley. She later applied for a scholarship and secured one at Caltech. She was supervised by Ernest O. Lawrence who was then the director of the Radiation Laboratory. In 1940, she completed her Ph.D. and became a member of the Phi Beta Kappa. Wu remained a postdoctoral fellow at the Radiation Laboratory.

On May 30, 1942, Chien-Shiung Wu married Luke Chia-Liu Yuan who was a physicist at the home of Yuan’s supervisor Robert Millikam. Robert was also the President of Caltech. After their marriage, they moved to the East Coast of the United States of America. After the move, Wu was appointed a faculty member at Smith College in Northampton in Massachusetts.

She later became an associate professor at the College, and she got a salary increment. All this happened after Smith received good recommendation letters from Lawrence. Wu later became an instructor for Naval Officers at Princeton University in New Jersey.

In 1944, she joined the Manhattan Project’s Substitute Alloy Materials Laboratories at Columbia University. In the same year, she was contacted by Colonel Kenneth Nichols after a B reactor at the Hanford Site malfunctioned. Colonel Kenneth was the Manhattan District Engineer. Wu and Nichols together found out that the reactor was malfunctioning because it has a large neutron absorption cross-section.

In 1945, Wu became an associate research professor at Columbia University. Two years later, she gave birth to her son, Vincent Yuan. In 1949, Yuan became a member of the Brookhaven National Laboratory faculty. He moved with his family to Long Island after he got the job.

In 1954, Chien-Shiung Wu took up United States Citizenship. In 1952, she became an associate professor at Columbia. Six years later, she became a full professor. In 1973, she became the Michael I. Pupin Professor of Physics at the institution. Her students referred to her as the Dragon Lady. Wu continued to research on Beta decay while also teaching. She conducted the Wu experiment which contradicted the hypothetical law of conservation of parity. The experiment earned her the inaugural Wolf Prize in Physics in 1978.

In 1963, Chien-Shiung Wu started investigating and later confirmed the Conserved Vector Current Hypothesis of Richard Feynman and Murray Gell-Mann. She also confirmed the E. M. L. Pryce and John Clive Ward’s calculations on the correlation of the quantum polarizations of two photons propagating in opposite directions. In 1966, she published her book ‘Beta Decay.’ Later on, Wu researched the molecular changes in the deformation of hemoglobins that generate sickle cell anemia. In the 1960s, she studied magnetism. In 1981, she retired and became professor emeriti.

Chien-Shiung Wu died on February 16, 1997, of a stroke at the age of eighty-four in New York. Her husband and son survived her. She had many honors to her name including being elected a fellow of the American Physical Society and a member of the United States National Academy of Sciences among others. Wu was the first woman to receive an honorary doctorate from Princeton University. She also became the first female President of the American Physical Society. In 1998, she was inducted into the National Women’s Hall of Fame.