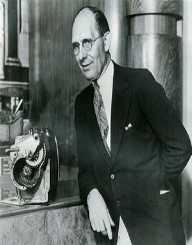 American inventor and engineer Charles Kettering was born on the 29 August 1876 and raised on a farm near Columbus in Ohio. His parents were Jacob and Martha Hunter Kettering, and he was one of five children born to the couple.

Charles Kettering graduated from high school and worked as a teacher for three years before enrolling at Ohio State University. He left without completing his degree, due to eye problems. Kettering then worked for two years before returning to university and completing a degree in electrical engineering in 1904.

After graduating Charles Kettering took up a position with the National Cash Register Company in Dayton, Ohio. At the time of his employment with NCR, the company’s cash registers were hand-cranked mechanical devices and Kettering was hired to work on the improvement of the product. He did this by connecting the machines to telephones lines which led to quicker and more efficient sales. Kettering was subsequently promoted to lead a team in NCR’s invention department. He then designed an electrically powered cash register, and NCR’s first electric cash register was unveiled in 1906.

His next invention with NCR was an electric cash register combined with a printer which produced an itemized sales slip. This became available in 1908. His 1918 invention of the aerial torpedo, the Kettering Bug laid the foundation for the design and development of guided missiles.

Charles Kettering became interested in the automobile, particularly the ignition system. At the time batteries had to be frequently replaced and Kettering adapted his magnetic relay from his cash register to improve the life of car batteries. He formed the Dayton Engineering Laboratories Company. Cadillac was the first company buy the product. Kettering resigned his position at NRC and concentrated on automotive electrical systems. In 1915 Colonel Deeds joined Delco. Deeds was astute at business, and this freed up Kettering to focus on research and development. Delco became part of the United Motors Corporation in 1916, and General Motors acquired the company in 1918.

Charles Kettering was put in charge of the General Motors Research Corporation where he worked for almost thirty years. He lodged more than a hundred and forty patents during this time.

After retiring from GM in 1947, Charles Kettering continued to serve as a director and research adviser until his death in Dayton on November 25, 1958.

Charles Kettering married Olive Williams on the 1 August 1905. The couple had one child, a son Eugene Kettering (b.1908) who worked with his father on the adaption of the diesel engine for railroads.

After suffering from some strokes, Charles Kettering died in Dayton on November 25, 1958.

Charles Kettering received many medals awards and honors including thirty honorary doctorates. Time Magazine did a feature on Kettering in January 1933, and he was on the cover of the magazine. Medals included the Franklin Medal (1936) the Hoover Medal (1995) and the IEEE Edison Medal (1958).

The Charles F Kettering Foundation and the Sloan-Kettering Institute for Cancer Research were both named in his honor. And in 1998 the GMI Engineering & Management Institute was renamed Kettering University.

Charles Kettering established a foundation, the Charles F Kettering Foundation, in 1927 to promote and encourage scientific invention and research by offering opportunities to researchers and graduates.