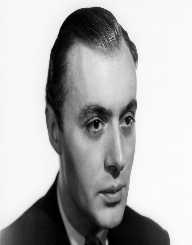 Charles Boyer was born on 28 August 1899 in France, to Maurice Boyer and Augustine Louise Durand. By all accounts, he was a shy introverted child who loved books and reading.

He received a degree in philosophy from The University of Paris-Sorbonne, France.

After graduating from university, Charles Boyer began working in the French silent film industry. His debut was L’homme du large in 1920. Then he appeared in Le grill on du foyer in 1922 followed by Le Capitaine Fracasse in 1929. His first English speaking part was playing a chauffeur in Red-Headed Woman (1932) with Jean Harlow. He then appeared in The Only Girl (1933) and Private Worlds (1935 ) making the transition from silent film to talkies in the USA and Europe.

Initially, the US film industry ignored Boyer. This was despite the fact he was a successful actor in France. He persisted, and soon he was in his stride in the USA, playing the suave leading man. Although shy by nature, the handsome Frenchman played the confident ladies man to perfection. Female audiences adored him.

It is said that Charles Boyer turned down offers to appear in the 1930 classics If I Were King, The Great Waltz, and Wuthering Heights.

Charles Boyer was nominated for four Academy Awards, three for Best Actor in a Leading Role. They were in 1938 for Conquest (1937), in 1939 for Algiers (1938) and Gaslight in 1945 (1944). He won a fourth, an Honorary Award, in 1943 for his cultural achievement in setting up the French Research Foundation in Los Angeles.

Charles also won a 1952 Tony Award for his performance in Don Juan in Hell. He was awarded a star on the Hollywood Walk of Fame in 1960. And in 1963 he was nominated for another Tony Award for Best Actor for his role in Lord Pengo.

Charles Boyer continued acting well into old age. He became a US citizen in 1940.

Boyer once said that it had been love at first sight when he first saw his wife. Their marriage lasted a lifetime. After Pat Boyer died, Boyer lost the will to live and committed suicide two days of her death. He was 79. Charles and Pat Boyer had one child together, Michael Charles Boyer (b.1943). Michael committed suicide in 1965.

Charles Boyer was a bibliophile as well as a linguist. When talkie films started, he taught himself English and was soon fluent. A Frenchman, he also spoke German, Italian, and Spanish.

Charles Boyer will always be remembered as one of the silent movie stars who successfully made the transition to talkies. During his long career in working in Europe and the USA, he made over 80 films. He established the French Research Foundation in Los Angeles in 1943.