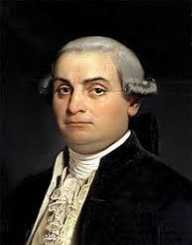 Cesare Bonesana di Beccaria, Marquis of Gualdrasco and Villareggio, was born 15th March 1738, in Milan. He came from a wealthy background.

In 1758, Beccaria graduated with a law degree from the University of Pavia. He also studied Montesquieu, a French judge, and philosopher. As a result, Beccaria also developed a keen interest in economics.

Cesare Beccaria released his first work in 1762. It was a book that addressed the currency of Milan and the issues it had. Beccaria then went on to offer his solution to the problem.

Soon after, he met brothers Alessandro and Pietro Verri. They teamed up with several other young, educated men and established a literary society. They were part of the Enlightenment movement. Discussions regularly centered around the criminal justice system and how to change it for the better.

Through the literary society, Beccaria met many political philosophers from Britain and France.

In 1764, Cesare Beccaria published On Crimes and Punishments. The Verri brothers also contributed to the book. The result was a work that argued for reform in the criminal system.

The book addressed many subjects. These included stopping torture, judges having discretionary power, abolishing the death penalty, and the inconsistency of sentences given, among others.

The work drew huge acclaim, and it was translated straight away into English and French. Beccaria also published the work anonymously, in case it upset the government. Beccaria re-published the work with his name on at a later date. This was after it had been well-received by his government and other prominent political figures.

Cesare Beccaria travelled to Paris where he met other leading thinkers of the Enlightenment movement. The Verri brothers went with him, but after three weeks, Beccaria returned home. He was very shy in public, and he was uncomfortable in his new environment.

In 1768, Beccaria joined the Palatine College of Milan as the Chair of Law and Economy.

He was then appointed to the Supreme Economic Council in 1771. In 1791, Cesare Beccaria was elected to the board to work on reform of the judicial code.

Beccaria had a significant influence on society. The founding fathers used his book when forming the American Constitution and the Bill of Rights.

Cesare Beccaria has had a town named after him in Pennsylvania in the U.S. He also has a square in Florence named in his honor.

He had four children.