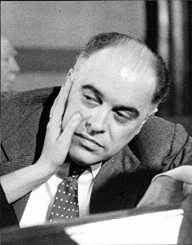 Carlo Fortunato Pietro Sr. was an Italian film producer. Born on December 11, 1915, he produced over 150 films and best known for films like La Strada, 1954, which won an Oscar Award. Carlo Ponti started his professional career working with his father in his law firm before venturing into film productions.

Carlo Fortunato Pietro Sr. was born on December 11, 1912, in Magenta, Lombardy. He received education at the University of Milan, where he earned a law degree in 1934.

After graduating, he joined his father’s law firm. It was during this period that he gained interest in the film industry, as he was involved in negotiating contracts. This interest became stronger, and in 1940, he established a production house in Milan. His debut work was the production of Mario Soldati’s Piccolo Mondo Antico, starring Alida Valli.

This was Alida’s first major role. The film, which was about the litigation between Italy and the Austrians, for the annexation of northeastern Italy into the Kingdom of Italy during the Risorgimento became very successful commercially. However, Ponti was briefly jailed since the film undermined Italy’s relationship with Nazi Germany. In 1941, he collaborated with Riccardo Gualino’s Lux film in Rome. They produced very successful films featuring comedian Toto. Ponti produced Anna, 1951, and Federico Fellini’s La Strada in 1954, which was hugely successful.

However, Fellini later claimed that Ponti did not contribute to the success of the film. His other production works include Boccaccio ’70, 1962, Marriage Italian Style, 1964, Yesterday, Today and Tomorrow, 1965 and David Lean’s Doctor Zhivago in 1965. Others include Blowup, 1966, Zabriskie Point, 1970, The Passenger, 1974 and A Special Day, 1977 among several others.

Carlo Ponti married Giuliana Fiastri in 1946. They had a daughter Guendalina in 1951 and a son in 1953. In 1951, he met actress Sofia Lazzaro (Sofia Villani Scicolone), while he was serving as a judge in a beauty contest. Her name was changed to Sophia Loren in 1952. Carlo Ponti married Loren by proxy in 1957 after obtaining a Mexican divorce from Giuliana.

Since divorce was at the time forbidden in Italy, Ponti was threatened that he would be charged with bigamy and Loren with “concubinage” is they returned to Italy. After returning to Italy in 1960, he denied being married to Loren and the marriage was annulled in 1962. Ponti, Giuliana, and Loren later moved to France. It was in French that Giuliana and Ponti divorced in 1965. The following year he married Loren, and they became citizens of France.

The couple had two children, CarloPonti Jr., and Edoardo Ponti. He died on January 10, 2007, in Geneva, Switzerland from pulmonary complications. He was interred in a family tomb in Magenta, Lombardy.