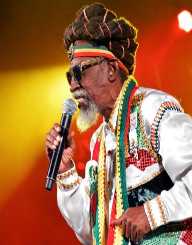 Bunny Wailer was an original member of reggae group “The Wailers” along with Bob Marley and Peter Tosh. Bunny Wailer is a three times Grammy award winner and the only surviving member of the group. He has become a respected elder statesman of the Jamaican music scene.

Early Life And ‘The Wailers’

Bunny Wailer was born Neville O’Riley Livingston on Apr 10th 1947 in Kingston, Jamaica. He grew up in the village of Nine Miles in St Ann’s. His friendship with Bob Marley began as toddlers. Both were from one parent family. Livingston was brought up by his father and Marley by his mother. The family’s moved in together in 1952. They had a daughter named Pearl Livingston.

Joe Higgs, a famous singer of the 50,’s lived nearby. He was keen to help other young talented children. Livingston & Marley joined with Peter Tosh and Junior Braithwaite. They formed a band with backing singers Cherry Green and Beverly Kelso. The band’s name changed many times and finally settled as “The Wailers.” They had a successful audition with Coxsone Dodd with their first single the classic “Simmer Down.”

The Breakdown Of “The Wailers.”

In 1966 Bob Marley left the group to seek fortune in the US. The Wailers continued without Marley. The group was then reduced to a trio with the departure of Braithwaite, Green, and Kelso. However, since the core group was talented, they continued to flourish.

By 1973 The Wailers was the biggest reggae band in Jamaica. Their international breakthrough began with a three month trip to the UK. However, the 2nd leg of the tour to the US did not materialize. Livingston dropped out citing religious beliefs (Rastafari principles). The Wailers was no more. They, however, gave two official benefit concerts after their official breaking.

Bunny Wailer became more focused on his spiritual faith. He then started a solo career.The three Wailers started their label. Marley started Tuff Gong and Tosh H.I.M. Intel Diplo. Wailer launched his own label ‘Solomonic’ with his debut single “Searching for Love” in 1973. Four more singles followed this. In 1976 the phenomenal ‘Blackheart Man’ was released. It is a good example of his roots reggae style. In the beginning, he and Tosh would sing each other’s background vocals.

Bunny Wailer also reworked the Wailers songs with the backing of top Jamaican musicians like Sly and Robbie. He released many songs which were popular. His best performance was on stage with Stevie Wonder for a benefit concert for the Jamaican Institute for the Blind. This was captured on tape for 1983’s live album. In 1986 he undertook his first tour outside Jamaica after the debacle of 1973. He released two new albums Rootsman Skanking and Rule Dance Hall. In 1990 he made his debut appearance at the Reggae Supersplash Fest.

Hunny Wailer started the new millennium with the album “Communication.” The death of Bob Marley due to Cancer in 1981 and murder of Peter Tosh in 1987 makes him the only surviving member of the Wailers.

Bunny Wailer won three Grammy Awards. The first one came in 1991 for Best Reggae Album “Time will Tell” A tribute to Bob Marley. Then four years later, he won another Grammy in 1995 for Crucial Roots Classic. In 1997, his third Grammy was awarded for the Hall of Fame A Tribute to Bob Marley 50th Anniversary (RAS)

Bunny Wailer was featured in True Love by Toots & the Maytals which won the Grammy in 2004.
In 2012 it was announced that he would receive Jamaica’s Highest Honour Order of Jamaica.