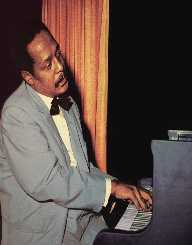 Bud Powell was an American jazz pianist who was a leading figure in the modern jazz/bebop movement in America.

Bud Powell was born in Harlem, New York on 27 September 1924. Powell’s father was a musician, and he helped foster a love of music in his son. Powell began playing the piano, his father’s instrument, at the age of five. He learned classical piano from a West Indian tutor by the name of Rawlins. Powell’s style of music was influenced by the jazz musicians who were famous in Harlem at the time. Fats Waller and James Johnson were particularly influential, and their works were among the first that Powell learned to play as a child. Powell began playing with his brother, William’s, band. His brother was older and played the trumpet. Powell continued to study the leading names in jazz to improve his music. He would often visit clubs to hear Thelonious Monk or Charlie Parker play. Powell also admired the musicianship of Art Tatum.

Bud Powell was taken under Thelonious Monk’s wing in 1942 and was introduced to a group of musicians who were experimenting in early bebop. Monk mentored the young Powell, who began to adapt his style to bebop. Monk even composed, In Walked Bud, as a tribute to their time working together. Powell also began landing gigs playing piano with various dance bands. The best known of these was Cootie Williams’ swing orchestra. Powell played with the group until 1945. His time with the group ended when wandering a train station in Philadelphia drunk, Powell was beaten by police and arrested. He began to suffer terrible headaches following the beaten and spent nearly three months in a psychiatric hospital. He then returned to playing piano for various groups on the Manhattan club scene.

In 1947, Charlie Parker asked Powell to play piano for a recording he was making with Miles Davis, Tommy Porter, and Max Roach. Powell’s success was undermined by a prolonged hospitalization from 1947 to 1948. Powell suffered serious head injuries following a fight, and due to his previous injuries, he was again sent to a psychiatric hospital. While hospitalized Powell underwent two bouts of electroshock therapy. He was released in 1948 but would be hospitalized again briefly in 1949. Powell began playing for Blue Note Records following his release. He performed with some big names such as Fats Navarro, Tommy Porter, and Buddy Rich. Notable recordings from this time include Bouncing with Bud and Un Poco Loco. However, Powell’s mental and physical state began to deteriorate and although he continued to compose music to a high level his piano playing was greatly diminished. He began to suffer from schizophrenia, and his treatments worsened his health.

Powell moved to Paris in 1959 and performed in European jazz festivals and clubs. 1961 saw Powell sign with Columbia Records. He recorded two albums with Columbia before returning to Blue Note Records in 1963. The same year he returned to New York. He intended to return to Paris, but his health deteriorated further and so did his career and Powell died in 1966.

Bud Powell was married twice, first to Audrey Hill; whom he married in 1953. The marriage ended a year later. His second marriage was to Altevia ‘Buttercup’ Edwards, and the two moved to Paris together. Edwards kept Powell heavily medicated. Powell had two children, Johnny and Cecelia. Powell contracted tuberculosis in 1963. He also began suffering from alcoholism. He became increasingly unbalanced and was hospitalized. He died of a combination of T.B and malnutrition on 31 July 1966.