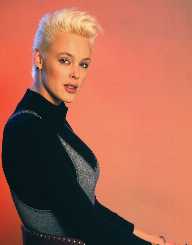 Danish model Brigitte Nielsen was born on 15h July 1963. The family lived in Rødovre on the outskirts of the capital Copenhagen. Father was Svend, and her mother was Hanne. The couple had two children, Brigitte and a son Jan. Her mother was a librarian and her father an engineer.

With her Amazonian Scandinavian good looks, Brigitte Nielsen was soon noticed by modeling scouts, and when she was sixteen, she left school model. Soon she was working with the top fashion icons such Versace and Armani. She married Kasper Winding in 1983 and had a son. The marriage did not last, and she moved to LA. Once in Hollywood she quickly found work in film. In 1985, she came to public attention when she acted in Red Sonja alongside Arnold Schwarzenegger and then with Sylvester Stallone in Rocky IV.

In 2000, Brigitte Nielsen acted in Hostile Environment and Doomsdayer. In 2004, she appeared in reality television including La Talpa (2004) in Italy, Strange Love saw her alongside with her boyfriend, rapper Flavor Flav. Later, Neilsen was a contestant in Dr’s Drew’s Celebrity Rehab where she was frank about her problem with alcoholism.

Brigitte Nielsen is musical and in the 1980s recorded an album Everybody Tells a Story. She appeared in the Michael Jackson video Liberian Girl and recorded dance tunes No More Turning Back, and You’re No Lady.

In the mid-eighties, Brigitte Nielsen’s life was tabloid fodder as the press became obsessed with her relationships with leading men of the day such as Sylvester Stallone and Arnold Schwarzenegger.
Arnold Schwarzenegger discusses his affair with Neilsen in his autobiography Total Recall: My Unbelievably True Life Story.

Brigitte Nielsen published an autobiography in Gitte Nielsen: You Only Have One Life. Neilsen became a naturalized Italian and divided her time between Italy and the USA. Neilsen is happily married to Mattia Dessi.

Brigitte Nielsen was a keen swimmer in her youth.

Stallone’s mother once infamously called Brigitte Nielsen a pig. They appeared together on Celebrity Big Brother in 2005 and seemed to have buried the hatchet. Brigitte also ate turkey testicles in I’m A Celebrity...Get Me Out of Here which upset animal activists and disgusted others.