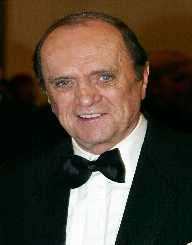 American actor, comedian, and writer Bob Newhart was born on the 5 September 1929 in Oak Park, Illinois. His parents were Julia Burns and David Newhart, and he is of Irish, German and English ancestry. Bob Newhart had two siblings.

During the Korean War (June 1950-July 1953) Newhart was drafted into the U.S. Army and served as a personnel manager. Bob Newhart was discharged in 1954. He then worked as an accountant and copywriter and around this time he began recording audition tapes. In 1959 Warner Bros. Records offered him a contract based on his audition tapes. Newhart had a breakthrough with his album The Button-Down Mind of Bob Newhart (1960). The collection consisting of comedic monologues achieved number one of the Billboard Pop Album Chart. The album became a bestseller in the US and internationally. His follow-up album The Button-Down Mines Strikes Back! was also a success.

His first television show was The Bob Newhart Show in 1961. The show lasted for just one season, although it did win a Primetime Emmy Award nomination. Bob Newhart frequently appeared on television including The Dean Martin Show, The Ed Sullivan Show, The Tonight Show with Johnny Carson and Saturday Night Live.

Bob Newhart also continued making comedy albums. Then in 1972, he was offered his sitcom television series, The Bob Newhart Show (1972-1978). The series ran for six seasons with Newhart playing the role of psychologist Bob Hartley. Other television shows included Newhart (1982-1990) and George & Leo (1997-1998). He also appeared in The Librarian television films: Quest for the Spear (2004), Return to King Solomon’s Mines (2006) and The Curse of the Judas Chalice (2008).

In 1962 Bob Newhart won a Golden Globe for Best TV male star. At the Banff Television Festival in 1998 he won the Sir Peter Ustinov Award, and in 1999 he was inducted into the OFTA TV Hall of Fame. He has won numerous other awards and nominations including a US Comedy Arts Festival Career Tribute award in 2001 and the Television Critics Association Award in 2005.

Bob Newhart’s wife is Virginia Quinn whom he married in 1963. The couple had four children together.