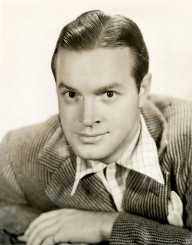 Bob Hope was an American comedian, singer, actor, author, dancer, athlete and a vaudevillian. He has acted in more than 70 feature films and short films over a career spanning around 80 years. He is most famous for entertaining the American Military by his comic acts. His numerous overseas tours accompanying the American Military to their wartime bases, his regular radio shows aired from military bases, and combat areas helped to boost the morale of the army men.

Bob Hope is one of the most honored artists of the entertainment industry. He hosted the Academy Awards 19 times, more than anybody else. In 1997, the U.S Congress passed a resolution conferring Hope the title of an honorary veteran of the U.S. Military Service for his benevolent work on behalf of the American Soldiers.

Born Leslie Townes Hope, Bob Hope was born on May 29, 1903, in Eltham, Kent, United Kingdom. His father William Henry Hope was a sculptor and stonemason and mother Avis Townes, a light opera singer. In 1908, Hope’s family immigrated to the United States and finally settled in Cleveland, Ohio.

With a large family of six brothers, his family had to face many financial constraints. Bob Hope started earning money from the early age of 12 to help ease his parent’s economic woes. His vocations comprised of singing, dancing and performing comedies. He participated in various dancing and amateur talent contests. In 1915, he won a prize from such a contest for his impersonation of the legendary Charlie Chaplin.

Bob Hope briefly attended the Boy’s Industrial School at Lancaster, Ohio. Hope continued to earn throughout his teens working as a lineman and as a Butcher’s assistant. At the same time, he attended dance classes with his vaudeville partner and girlfriend Mildred Rosequist. He tried his hand in boxing also. In 1919, he fought a few charity bouts under the name Packy East and was mostly successful.

Bob Hope pursued the dancing career seriously at this stage. He persisted with his dance sojourn and finally made it to Broadway in ‘Sidewalks of New York’ in 1927.

Bob Hope started performing solo by the early 1930s. His role in Broadway Musical ‘Roberta’ captivated the spectators for his superb comic timing and unmatched sense of humor. His superb talent in comic acting was again showcased in his 1936 act ‘Ziegfeld Follies.' In 1937, Hope made a 26-week contract with NBC Radio for his first regular radio series titled the ‘Woodbury Soap Hour.’ In the very next year, he signed a ten-year contract with the sponsors of ‘The Pepsodent Show.’ The show was named ‘The Pepsodent Show Starring Bob Hope’ to show the level of his involvement with it.

In 1940, Bob Hope produced his first comedy film starring famous crooner Bing Crosby along with himself. In ‘The Road to Singapore’ they performed as a pair of con artists opposite their common love interest Dorothy Lamour. It proved to be a masterstroke as the film struck gold at the box office due to the awesome performance of the duo. After the success of their first venture, Hope and Crosby remained lifelong friends and participated in seven ‘Road pictures’ together. Throughout the 1940s, Hope appeared in many feature films and short films including a series of ‘Road Movies.’

The beginning of the 1950s saw a remarkable change of medium in Hope’s life. Bob Hope appeared to be slowly drifting towards the small screen after his film career began to fade at the start of the new decade. He started his association with the small screen with his first television special on NBC in 1950. His other notable television programs include ‘The Bob Hope Show,’ ‘I Love Lucy’ and ‘The Star-Spangled Revue’.

His popular award-winning NBC anthology series ‘Bob Hope Presents the Chrysler Theater’ was aired between 1963 to 1967. From 1970 to 1971 he made some excellent Christmas programs for the NBC network. These programs were later filmed in front of military audiences in Vietnam War front at the height of the war.

Bob Hope's last appearance on screen was in the 1972 film ‘Cancel My reservation.’ The film was poorly received.

Bob Hope married Grace Louise Troxell, his vaudeville partner on January 25, 1933, in Erie, Pennsylvania. The marriage was short-lived. They divorced in 1934. In the same year, Hope married Dolores Reade, one of his co-stars on Broadway in Roberta. They later adopted four children and remained unseparated till the death of Bob Hope.

Numerous awards honored Bob Hope. Notable among these are a ‘British Knighthood’ in 1998, a ‘Medal of the Arts’ from President Bill Clinton in 1995 and a ‘Lifetime Achievement Award’ from the Kennedy Center in 1985.

Bob Hope died of pneumonia on July 27, 2003, two months after his 100th birthday. He was at his home in Toluca Lake, California at the time of his death. He was entombed in the Bob Hope Memorial Garden at San Fernando Mission Cemetery, Los Angeles. His wife Dolores joined him in the cemetery in 2011 after she died at the age of 102.