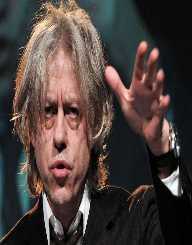 Bob Geldof rose to fame in the 1970s to 80s; it was not by chance but by his first music release. The rhythmic pattern from one of his best song the Rat Trap said it all. Bob is an all in one person, a political activist, occasional actor, songwriter and a singer. Not to mention he is also a leading singer of an Irish band titled Boomtown Rats. In partnership with his friend, Midge Ure, he rocketed with Do They Know It's Christmas song. It turned out to be one of the admirable hits to date. Geldof was also famous, not for his musical style but his insensitive personality.

Bob Geldof was first seen in the world on October 5 in 1951. He was born in Dún Laoghaire, Leinster, Republic of Ireland to Evelyn and Robert Geldof. During his teenage years, his mother died where life took its turn. He came to know the real definition of bullying and starvation in the course of his education. Before joining Blackrock College, Bob tarmacked for several months. After college, he worked as a music journalist in Columbia. He also got a chance to host a teenage program titled Switchback for some time.

In 1975 Bob founded the Boomtown Rats rock band where they released their first song titled Rat Trap in 1978.It turned into an open gate for them since it was ranked number one in the United Kingdom. They followed it up with I Don’t Like Mondays that cemented United Kingdom charts of fame.

Early in 1980, they released their first album titled Mondo Bongo where one of its singles 'Up All Night' cropped the United States Billboards. The same year, Bob became the talk of the town. He was once invited to a Late Night Show where he blamed Irish Politician and some of the Catholic Church Members. The reason behind this was that they brought negative impact to his native country. This showed that he also had a political interest that continued to develop.

Bob later left the band in 1986 where he went to launch his solo music. After some time, he released The Great Song of Indifference, and This Is the World Calling. The following year, Bob published ‘Is That It?’autobiography.

In the mid of 1992, Bob Geldof collaborated with other notable legends such as Freddie Murray. Later in 1998, he served as an XFM Radio DJ. All broke loose when he announced that Ian Dury, rock single was dead but it was just but a mere controversial. The outcome made him be named as the worst DJ on earth by NME broadcast. He then released his last album titled Sex, Age, and Death in 2001.

From 1981 to 2005 Bob appeared in numerous shows. Some of the major ones includes performing at Amnesty International’s benefit show and live eight projects. He then created a charity group Band Aid that featured Irish musicians and British.

In 1986 and 2005 Bob garnered several distinctions such as an Order of the British Empire and a Man of Peace Award. Bob married Paula Yates; a television presenter in 1986.The two was blessed with a daughter, Fifi Trixibelle before they legalized their union. After their marriage, they were blessed with two daughters. In 2000 Bob’s wife was pronounced dead due to a drug overdose. In 2014 his daughter, Peaches also died with the same cause as her mother. Geldof currently lives in South London with his second life partner, Jeanne Marine, an actress.