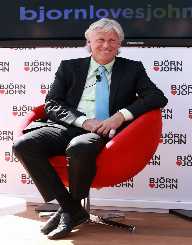 Björn Borg is a top-notch Swedish tennis player. He is widely believed to be one of the greatest tennis players in the game's history. Borg was born on 6 June 1956 in Stockholm, Sweden.

Borg rose to stardom in 1970's after he won several titles including French Open and Wimbledon. He became the first player to earn as high as one million dollars as prize money in a single season. Too much attention and pressure led to his early retirement at 26 years.

Björn Borg was born in Stockholm, Sweden. He was the only child of Rune and Margaretha Borg. He grew up in Sweden and developed an immense interest in tennis. He was fascinated by the golden tennis racket given to his father as a gift after winning a table-tennis tournament. When the father realized the passion in Borg, he gave the golden racket to him launching his tennis career.

Borg was noticed by Percy Rosberg, a tennis coach, and he started training immediately. He made the long journey each day to meet with the coach. Borg won his first match when only 11 years. He continued with the practice and won the Swedish Junior National Championships when he was 13 years. When he realized that his passion was in tennis, Borg dropped out of school to concentrate on the tennis training.

Björn Borg was the Sweden representative in the 1972 Davis Cup. By this time, he was 15 years, and he won his opening single. In the same year, he won Wimbledon Junior Single Title overcoming Britain's Buster Mottram. In December, he bagged the Orange Bowl Junior Championships after straight sets against Vitas Gerulaitis

Borg joined the professional league in 1973 where he got to the quarter-finals of Wimbledon. In 1974, he won his first singles title at Italian Open. He became the youngest winner of the title.

In 1975, Borg beat an experienced Rod Laver in the World Championship Tennis Semi-final in Dallas, Texas. He later lost in the final. In the same year, he retained his French Open title, he also won two singles, and one double in Davis Cup final in Sweden setting a record. He never lost any other Davis Cup singles. He retired with a record 33 wins. A record that still stands.

In 1976, Björn Borg won the World Championship Tennis in Dallas, Texas beating Guillermo Vilas in four straight sets in the final. Borg won the 1976 Wimbledon without losing a single game. In the same year, he got to the final of the US Open but lost to world's No. 1 Jimmy Connors.

Between 1978 and 1980, Borg was at the peak of his career and he won the French-Wimbledon all the three years. In 1978, he won the French Open. He overcame Connors in the 1978 Wimbledon with straight sets. He won his fourth French Open singles and the Wimbledon singles which stamped his authority as the best tennis player in the world.

In 1981, Borg won a Grand Slam title at the French Open, a record only broken by Rafael Nadal. He won the Wimbledon title having a record 41 wins.

In 1982, Borg participated in only one tournament which he lost in the quarter-finals of Monte Carlo. He retired the same year at the age of 26 years.

Björn Borg was married to a lady in the same profession. He married the Romanian tennis pro-Mariana Simionescu. The wedding occurred on 24 July 1980, in Bucharest. The marriage, however, lasted for only four years. The couple divorced in 1984. Borg sired a child with the Swedish model Jannike Bjorling.

From 1989 to 1993, Borg married Loredana Berte, an Italian singer. He married for the third time on 8, June 2002. He wedded the third wife, Patricia Ostfeld.

Björn Borg ventured into personal investments that almost made him bankrupt.