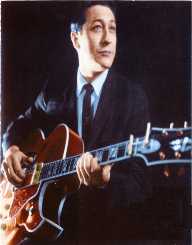 A famous rock roll artist of the mid-20th century, Bill Black was a former collaborator of Elvis Presley. He later branched out on his own and formed his band titled Bill Black’s Combo. Bill Black was a Rock and Roll Hall of Fame inductee, and several movies have been made about his life as a tribute to his legacy.

Bill Black was born as William Patton Bill Black Jr. in Memphis, Tennessee on September 17, 1926. His star sign was Virgo. Black’s father was a music enthusiast and often played for his family. Black had eight siblings and those musical evenings inspired him to learn more about music. Bill Black learned to play a special instrument designed by his father, and by the time he turned sixteen, he had already learned enough acoustic guitar to play at the local bars.

After playing at the local bars for some time, Bill was sent to serve in the US Army stationed at Fort Lee in Virginia. The time was of WW II. When he returned from the war service, he started playing bass fiddles. Bill Black teamed up with Scotty Moore – a guitarist, on various occasions and performed at clubs and radio shows. They also became partners of a few bands. In 1954, the duo came into contact with a rising Elvis Presley. Although unimpressed by him at first, they decided to do a few studio sessions. During one of the recordings, That’s alright, Mama Black and Moore realized that Elvis had potential and the trio recorded a few songs to release on the radio.

The Blue Moon Boys was formed, and the trio became hugely successful. Black played bass on some early recordings of Presley including Heartbreak Hotel, Baby Let’s Play House, Hound Dog and Jailhouse Rock. As part of the trio, Black added the comedy element which made the live shows much more enjoyable for their audience. After working with Presley for a few years, Black formed the Bill Black’s Combo together with a few other musicians in 1959. The band stuck to blues and rock music for the remainder of Black’s life and after his death, they ventured into country music with Bob Tucker. Overall they released 20 hit albums. Their song Smokie Part 2 sold over one million copies. In the last three years of his life, Black was also the owner of a recording studio – Lyn Lou Studio.

Bill Black met Evelyn, another guitarist, while he was stationed at Fort Lee in the US Army during the WW II. They soon struck a close friendship, and a year after the war was over, they married each other. Bill Black settled in Memphis with his wife. They had a son named Lyn and a daughter named Lou.

By 1963, Bill Black was diagnosed with brain tumor and his health was deteriorating. He underwent two surgeries to get the tumor removed. However, it stayed. In an attempt to get rid of it permanently, he decided to undergo a third surgery on his doctors’ advice. Bill Black was too fragile, however, and didn’t survive the operation. He died on October 21, 1965, at the age of 39.

After his death, Bob Tucker and Larry Rogers bought the rights of Bill Black’s Combo and achieved great success in the field of country music.