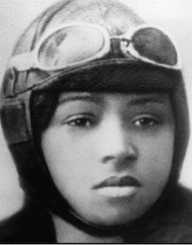 American civil aviator Bessie Coleman, the first female African-American pilot with a flight license, was born on January 26, 1892, in Atlanta, Texas, United States of America. Born to her sharecropper parent George and Susan Coleman, she was their 10th child among a total of 13 children of her parents. Her father was part native (Cherokee) and part African-American descent whereas her mother hailed mostly from an African-American heritage. Bessie grew up in Waxahachie, Texas, where her family moved when she was only two years old. She had been there until the age of 23.

Bessie Coleman attended a makeshift one-room school in Waxahachie situated at a distance of four miles from her residence. At the age of six, she was enrolled at the school. She used to cover the distance regularly by foot. Her brilliance in mathematical aptitude helped her in completing eighth grade from that school. She had to compromise her study each year during the cotton harvest season to help her mother in harvesting the cotton. Bessie and her family members were subjected to regular racial discrimination prevailing in the region of Texas at that time. Their abject poverty did not in any way help their cause.

Her father left them and moved to the Native Indian Territory of Oklahoma in search of better job opportunities and also to escape racial discrimination so prevalent in the Texas region. Her family led by her mother did not accompany her father and stayed back in Waxahachie. To support the family, Bessie Coleman's mother started to work as a cotton picker in the cotton fields of Texas while her two brothers began working as day laborers. Bessie herself worked as a laundress along with her mother to fund her higher studies and also worked in the cotton fields beside her mother.

Bessie Coleman earned a scholarship from Missionary Baptist Church School in Texas at the age of 12 and completed her high school graduation. She attended the Oklahoma Colored Agricultural and Normal University (now Langston University) but could finish only one semester with the money she had saved to fund her education by working as a laundress. She returned to her family home in Waxahachie after completing one semester and continued to work as a laundress until 1915.

Bessie Coleman then moved to Chicago to join her older brother Walter at the age of 23. In Chicago, she found a job of manicurist at the White Sox Barber Shop and also worked as a restaurant manager. She was gradually getting attracted to the then-new profession of aviation after hearing the inspirational stories of the heroics of World War I pilots and decided to become a pilot herself. Racial discrimination was the primary hindrance in Bessie’s bid to enter an aviation training school in the United States. However, her steadfast determination made her learn French, and she was eventually accepted at the Caudron Brothers School of Aviation in Le Crotoy, France.

Bessie Coleman was supported financially by the Black philanthropists Robert Abbott, founder of the Chicago Defender and Jesse Binga, a banker by profession. On June 15, 1921, she became the first woman of the Native American and African-American ancestry to obtain an international pilot’s license from the Fédération Aéronautique Internationale. She also trained herself further to specialize in stunt flying and parachuting.

While Bessie’s exploits on the sky were exhibited in the Newsreel films, she found it tough to get a regular job of commercial pilot due to the simmering racial and gender bias prevalent in her home country. She had to resort to barnstorming and stunt flying to make a living. Commercial flights were at its early stages at that time, and it was a very fiercely competitive male-dominated arena. She gradually realized the fact that she had to solely rely on exhibition and stunt-flying to pursue her dream career.

As a result, Bessie Coleman decided to sharpen her flying skills to more advanced levels and spent two months in France pursuing an advanced course in aviation. She then traveled to Netherlands and Germany and received additional training from the then most distinguished aircraft designer Anthony Fokker and one of the leading manufacturers of aircraft, Fokker Corporation respectively. She returned to New York in August 1922 and launched her career in exhibition flying with renewed vigor.

Over the next five years, Bessie Coleman was seen flying Curtiss JN-4 "Jenny" biplanes, and other army surplus aircraft abandoned after the conclusion of World War I. She gained considerable popularity among the Americans and began getting invitations for important events and was being interviewed by the leading newspapers. On September 3, 1922, she made her first ever public flight, also a first by an African-American woman, when she participated in an American air show for the first time. She was selected for the show along with eight other top American pilots. The event was organized in commemoration of the all-black 369th Infantry Regiment of World War I.

In December 1922, Bessie Coleman was offered a role in a full-length movie titled ‘Shadow and Sunshine.’ Though she initially was willing to accept the offer to gain publicity and to raise funds for her proposed flying school intended to train black people, she readily refused the offer. She realized that she would be exhibited in a derogatory image of black people which most whites stereotypically possess about her race, which was to be shown in the very first scene of the movie.

Though her family never acknowledged Bessie Coleman's relationship with Claude Glenn, a friend of her brother, it is reported that they married each other on December 30, 1916. Bessie soon separated from her 14 years older husband.

On April 30, 1926, Bessie died in a tragic plane crash ending the life of a most promising and dare-devil woman aviator of the post World War I era at a very early age of 34. She was in the second seat of her Curtiss JN-4 (Jenny) aircraft without putting the seat belt as she was busy observing the terrain below for her proposed parachute jump for the next day. William Wills piloted the plane. Suddenly, the aircraft spun out of control and threw both Wills and Bessie out of the aircraft to hit the ground 2000 feet underneath. Both Wills and Bessie died instantaneously after hitting the ground.