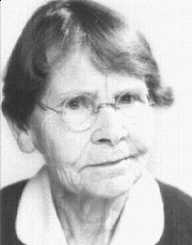 Barbara McClintock was born on June 16, 1902 in Hartford, Connecticut. Her father was a physician and she had three other siblings. From an early age, McClintock was an independent child. When she was 3 years old, she went to live with her uncle and aunt in Brooklyn to reduce the financial burden on her parents, while her father established his practice. The rest of the family moved to Brooklyn in 1908. She went to the Erasmus Hall High School and graduated in 1919. It was there where she discovered her love for science. McClintock continued her education at Cornell University College of Agriculture.

McClintock studied biology at Cornell, but in her first semester, she developed an interest in genetics. In 1922, professor C. B. Hutchison invited her to join the graduate genetics course. In 1923, McClintock received BSc from Cornell. In 1925 she earned her MA and in 1927- Ph.D.

In 1930, McClintock made a breakthrough discovery by describing the cross-shaped interaction of chromosomes during meiosis. She proved the link between chromosomal crossover during meiosis and the recombination of genetic traits. Her breakthrough publications led to her being awarded several postdoctoral fellowships from the National Research Council. She then continued to study genetics at Cornell, University of Missouri and California Institute of Technology. At Missouri, she was introduced to the use of X-rays as a mutagen. This led to the discovery of ring chromosomes and made a hypothesis that chromosome tips structurally ensure the stability of chromosomes.
McClintock received a fellowship from the Guggenheim Foundation and went to Germany for six- month training in 1933. Upon her return to the U.S., McClintock took a position as a professor at the University of Missouri-Columbia.

While working as a professor at Missouri, McClintock continued her research on the effects of X-ray on maize cytogenetics. She discovered the so-called breakage-rejoining-bridge cycle, which proved that rejoining of chromosomes is not a random event and demonstrated a source of large-scale mutations.

Although her research was rapidly progressing, McClintock was not satisfied with her position as assistant professor. In 1941, she took a leave of absence in hopes to find a position elsewhere. She then accepted a position as Visiting Professor at Columbia University. Over there she met her former Colleague Marcus Rhoades, which offered her to share his research field at Cold Spring Harbor on Long Island. In later 1941, McClintock accepted a position to Cold Spring Harbor Laboratory’s Department of Genetics.

McClintock continued to be highly productive at her new research facility. In 1944, she was elected to the National Academy of Sciences and became the first female president of Genetics Society of America. In 1944 she was invited to Stanford to undertake a study on cytogenetic analysis of Neurospora crass. During two months, she described the karyotype and entire life cycle of the species. N. crassa became the model species for classical genetic analysis.

In 1944, at the Cold Spring Harbor Laboratory, McClintock began studies on mechanisms of mosaic color patterns of maize seed. She identified the two dominant and interacting genetic loci- Dissociator and Activator. Between 1948 and 1950, she developed a theory that these elements regulate genes by inhibiting or modulating their action. She developed the theory of gene regulations, which explained how complex organisms made of cells with identical genomes have so many different cells with different functions. Her work was at the time conceptually difficult and was not immediately understood. She continued work on her ideas and published several statistical papers as well as made guest lectures at universities to speak about her work. In 1953 McClintock stopped publishing since she was afraid that she might get alienated from the scientific mainstream.

In 1960, the importance of her work on the controlling elements was finally revealed. French scientists Francois Jacob and Jacques Monod described the genetic regulation of the lac operon. Following the publishing of French scientists paper, McClintock wrote an article for American Naturalist comparing the lac operon to the controlling elements in maize. Her contribution to discovering gene regulation is still not well recognized.

Barbara McClintock has been awarded several honors. She was awarded the Kimber Genetics Award in 1967 and 1970, president Richard Nixon honored her with the National Medal of Science, making her the first woman to receive this honor. She also became the first recipient of MacArthur Foundation Grant. McClintock was awarded 14 Honorary Doctor of Science degrees. In 1986 she was inducted into the National Women’s Hall of Fame.

Most notably, McClintock received the Nobel Prize in Physiology or Medicine in 1983. She was the first woman to win the prize unshared for her mobile genetic element discovery. Afterward, McClintock continued to work as key leader and researcher at the Cold Spring Harbor Laboratory. In her last years, McClintock became a more public person. In 1983, Evelyn Fox Keller published her biography A Feeling for the Organism, which brought her story to the public. She often gave talks on her discovery of mobile genetic elements and history of genetics. In 1987, she published the anthology of her 43 publications The Discovery and Characterization of Transposable Elements: The Collected Papers of Barbara McClintock. She died in 1992 at 90 years of age.

McClintock was never married and didn’t have any children. After her death, she has been the subject of science historian Nathaniel C. Comfort. His biography The Tangled Field: Barbara McClintock’s Search for the Patterns of Genetic Control contests several claims about her scientific work, like the claims that her work wasn’t recognized and accepted because of her gender.