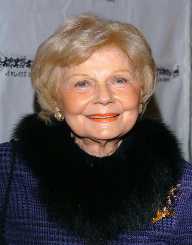 Barbara Combes was born on December 22, 1915, in Los Angeles, California, USA. She later took on the name Barbara Billingsley, when she married her first husband, which is the name that she is now best known for.

Billingsley’s acting career began in the mid-1940’s. Many of her first roles were as unnamed characters in shorts. She was not credited for many of her early works. It was not until 1948 that she earned her first credited role in a film (The Argyle Secrets) as the character Elizabeth Court. However, after this role, she resumed taking on small uncredited roles for the next year. Some of her other credited works (all from 1949) include I Cheated the Law, Air Hostess, and Prejudice.

In the early part of the 1950’s, Barbara Billingsley took on a mix of credited and uncredited roles. However, both categories of roles tended to be small. In 1952, she worked on her first recurring television show, Rebound, as Pat. From then on, she began to appear in many television shows, but never for more than an episode or two for most of these shows In 1953 to 1956; she began working in larger roles on several shows, including Four Star Playhouse, Professional Father, The Box Brothers, and Schlitz Playhouse. It was then in 1957 that she took on her most famous role as June Cleaver in Leave It to Beaver. She went on to play this character for over 200 episodes.

For the first few years of the 1960’s, Barbara Billingsley worked solely on Leave It to Beaver until the show ended in 1963. After this show ended, she took a break from acting for the remainder of the decade. In the 1970’s, she only took on a small role in the show The F.B.I.

Barbara Billingsley returned to acting in the 1980’s. She worked primarily in made-for-television movies and small roles on television shows. She also worked on a Leave It to Beaver spin-off movie, Still the Beaver. She also began working on The New Leave It to Beaver from 1983 to 1989. Some of the other shows and movies she worked on during this decade included High School U.S.A., Silver Spoons, Back to the Beach, Muppet Babies, and Baby Boom.

The 1990’s were a relatively slow time for Billingsley. She mostly worked in small roles in television shows. Some of the shows she worked on during this decade included Empty Next, Bobby’s World, and Murphy Brown.

The 2000’s were Billingsley’s final decade of acting. She appeared in one television show, Mysterious Ways, and one made-for-television film, Secret Santa. She retired from acting in 2003.

Even though she had a long acting career, Barbara Billingsley only won one award: the Character and Morality in Entertainment Camie Award for her work in Secret Santa. However, she has also been nominated for two Daytime Emmy awards, both for Outstanding Performer in a Children’s Series for her voice role in Muppet Babies.

Barbara Billingsley died on October 16, 2010, in Santa Monica, California, USA. Her cause of death was polymyalgia rheumatica. She was 94 years old when she passed away.