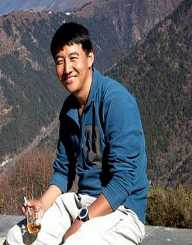 Babu Chiri Sherpa was born on June 22, 1965, in Taksindu, Nepal. His father was Lhakpa Sherpa. He worked with John Hurt, an adventurer who climbed Mount Everest. He also had seven siblings.

As a child, Babu Chiri Sherpa spent his time living on a farm with his parents. He put in a lot of hard work on the farm. Because he lived in a small village, he didn’t have access to formal education. Luckily, he was able to teach himself how to read. He also learned how to speak several languages, such as English and Hindi, as well as his native language of Nepali.

Babu Chiri Sherpa first began his mountaineering career when he was only 16 years old. He was in part inspired to become a mountaineer because of what he had heard about the Sherpa Tenzing Norgay, who was one of the first people to successfully summit Mount Everest. He first worked as a trekking porter, which is a type of mountaineer that often carries things for others who are summiting mountains and other tall peaks. He worked in his career for several years. Chiri’s first big accomplishment in mountaineering was when he first submitted the Mera Peak in 1985. This feat only took him four hours. He had some other mountaineering accomplishments as well.

Some of Chiri’s biggest accomplishments had to do with the many times that he climbed Mount Everest. Mount Everest is the tallest mountain in the world and one of the most deadly mountains in the world as well. During his mountaineering career, Babu Chiri Sherpa climbed to the summit of Mount Everest ten times. During one of his climbs up the mountain, he only took about 17 hours to get to the top, which earned him a world record for being the fastest person to summit the mountain. Babu Chiri Sherpa won another world record for climbing the mountain when he stayed on its peak for 21 hours without an oxygen machine. To this day, no one has beaten his records.

During his long mountaineering career, Babu Chiri Sherpa worked with several other mountaineers, including a couple of his brothers, and Marc Batard.

Since Babu Chiri Sherpa did not have access to schooling when he was young, it was one of his biggest dreams for children near his village to have a school. Before his death, he managed to accomplish his goals of making a school.

Babu Chiri Sherpa was married to Puti Chiri. Together the couple had six daughters.

Chiri’s greatest talents proved to be his ultimate downfall. It was during one of his journeys that he stopped to take pictures of the view from the mountain. While doing this, he slipped and fell into a crevasse. The fall was the cause of his death. He died on April 29, 2001. He was only 35 years old.

In 2005, the Babu Chiri Sherpa Memorial Museum was opened. There was also a statue made of Chiri at the museum. The museum and statue were both funded the by the Everest Summiteers Association, as well as other smaller government and public groups.

A trust has been made in Chiri’s name to support his family after his death. This fund is called the Babu Chiri SherpaTrust Account.