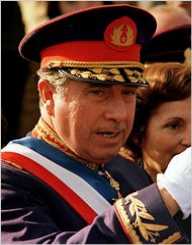 Augusto Pinochet was born in Valparaiso in 1915 to Augusto and Avelina Pinochet. He was one of six children.

Attended the military academy in Santiago and graduated in 1936.

Augusto Pinochet joined the military when he was seventeen years old, and by 1973, he was Commander in Chief of the Chilean Army. The Chilean President at the time was Salvador Allende, a Marxist who had been democratically elected. Shortly after his appointment as Chief of the Army, Pinochet was involved in a military coup to challenge President Allende. Eventually, the presidential palace was under threat. Allende committed suicide on the 11 September 1973 when he shot himself.

As the senior leader of the military junta who had overthrown the socialist government, Pinochet controlled Chile between 1974 and 1990.

Once in power, over a hundred thousand people were arrested in the first thirty-six months of his government. His main aim in the early three years was to silence the left of politics. Augusto Pinochet was also focused on installing free-market policies. The result was that there was an economic boom (1976-1979) and inflation dropped. By 1978, a referendum showed that three-quarters of the electorate supported Pinochet. In 1981 a new constitution declared Pinochet as President for an eight-year term with the proviso that in 1989, the people could decide whether or not he should be voted in for another eights years. Between 1980 and 1983, the economy went into recession, even though inflation was under control and Chile was experiencing economic growth.

A referendum was held to decide whether or not to adopt a new constitution. Included in the structure were proposals to ban all left-wing parties permanently, increase presidential powers and allow Pinochet an additional eight years in office. The slowdown in the economy led to protests and strikes throughout Chile. Then in 1986, an assassination attempt was made on Pinochet’s life. The planned 1989 plebiscite was brought forward, and in 1988, 55% voted against Augusto Pinochet staying in power. Elections were held on the 11 March 1990, and Patricio Aylwin of the Christian Democrat party was elected president of Chile. Pinochet remained commander-in-chief of the Chilean army. He retired from the military in 1998 and was made a senator for life.

In 1998 Augusto Pinochet went to London for back surgery and during that time was put under house arrest by the British Government at the request of Spanish authorities. The Spanish Government wanted him extradited on charges of murder and torture. At first, the British House of Lords voted for the extradition, but this was overturned and in 2000. The British Home Secretary Jack Straw decided that Pinochet was not fit to be extradited. Pinochet returned to Chile. The Chilean courts removed his immunity from prosecution and attempted to make him stand trial for human rights offenses, but failed to do so because of his failing health.

Augusto Pinochet died in December 2006. He still had three hundred outstanding criminal charges against him in Chile. These included human rights violations, tax evasion, and embezzlement. He had accrued a fortune of US$28 million.