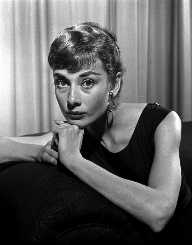 Audrey Hepburn is a film actress and a philanthropist. She is also regarded as a style icon for her fashion sense.

Audrey Hepburn was born Audrey Kathleen Hepburn-Ruston on 4 May 1929 in Ixelles, a municipality in Brussels, Belgium. Her mother was Ella van Heemstra, Dutch baroness and her father was a British subject born in Auschwitz, Austria - Hungary. Audrey had a sheltered and privileged life, and she traveled extensively with her family due to her father's job. She learned to speak five languages: Dutch and English from her parents, and later French, Spanish, and Italian.

In 1935, her father Joseph left the family abruptly in 1935, she and her mother moved to Arnhem. She attended Arnhem Conservatory in The Netherlands while she lived with her mother’s parents. In 1937, the mother-daughter moved to Kent, South East England. Audrey continued to study in a small school in Elham. The divorce between her parents was finalized 1938.

When World War II started, the girls moved back to Arnhem, Netherlands in hopes to avoid the war there. Audrey continued her schooling in Arnhem and started ballet classes. When Germany invaded the Netherlands in 1940, they had cut off food supplies in 1944 after the Dutch retaliated by railway strikes. Audrey and her family had to make flour from tulip bulbs during the Dutch Famine. It was during the war that Audrey changed her name to Edda Van Heemstra to be safe.

Audrey Hepburn worked as a cook and housekeeper in Amsterdam, while she continued to study ballet under Sonia Gaskell and Olga Tarassova. She also did small jobs as the chorus girl in musicals and part-time work as a model after she moved to London. Audrey dropped Ruston from her surname and was told by Ballet Rambert that she was too short and weak to become a prima ballerina.

In 1948, Audrey played an air stewardess in Seven Lessons, an educational travel film in Dutch. She took elocution lessons with Felix Aylmer to develop her voice, for her musical chorus work. Audrey was in the musical High Button Shoes in London and Sauce Tartare. But she got to be a featured player in Sauce Piquante, where a casting director spotted her. In no time, Audrey Hepburn was registered as a freelance actress with the Associated British Picture Corporation.

Audrey Hepburn made her debut in One Wild Oat, in an uncredited role during 1951. She had five more movies, Thorold Dickinson's The Secret People was her last role in London. After that, she moved to America to try her luck. In New York, she offered a small part in an English/ French film Monte Carlo Baby (French: Nous Irons à Monte Carlo). She was spotted by French novelist Colette and was offered to play Gigi on Broadway. Audrey needed private coaching, but her debut on Broadway was successful, earning her a Theatre World Award in 1952.

Audrey Hepburn was catapulted to stardom in 1953, after appearing in the Roman Holiday, alongside George Peck. Her other memorable roles include Funny Faces and Sabrina. Many would consider her most famous work to be Breakfast at Tiffany’s, where she played Holly Golightly. Audrey continued to be on Broadway, playing Ondine with co-star Mel Ferrer.

After Breakfast at Tiffany’s, Audrey and Givenchy became friends. Hubert de Givenchy was just starting his fashion brand. She also became the face of Givenchy's first perfume, L'Interdit, in 1957. Audrey continued to be in partnership with her friend over the years.

Audrey Hepburn also starred in My Fair Lady and expanded her acting genre to the suspense by appearing in Wait Until Dark. After 1970, she took less assistant jobs to focus on her children. But she would appear in Robin and Marian with Sean Connery, and her last cameo was in Always in 1989. In total, Audrey Hepburn made 31 films

Owing to her own experiences during World War 2, Audrey Hepburn was a great supporter of UNICEF. In particular, her focus was on children in developing countries. She made more than 50 trips around UNICEF projects in Asia, Africa, and Central and South America. In 1988, she became an extraordinary ambassador to the United Nations UNICEF. She retained the position until her death in 1993.

After her death, her sons and companion Robert Wolders established the Audrey Hepburn Memorial Fund, also known as Audrey Hepburn Society at the US Fund for UNICEF. The fund continues her humanitarian work to aid children in need.

Audrey Hepburn is one of the fourteen people who had managed to earn an Emmy, a Grammy, an Oscar and a Tony Award. Her Oscar was for Best Actress in a Leading Role for Roman Holiday. Tony was for Best Actress in a Drama for her Broadway performance in Ondine. Audrey won an Emmy for hosting PBS’s 1993 documentary series Audrey Hepburn’s Gardens of the World. She won the Grammy Award for Best Spoken Word Album for Children, after her death. Audrey also won three BAFTA awards thrice, for Best British Actress in Leading Role.

In 1990, Netherlands Flower Information Society, created a hybrid white tulip named for Hepburn, “as a tribute to the actress’s career and her longtime work on behalf of UNICEF. She gave the first flower to her aunt, Jacqueline. The official dedication ceremony of presenting the flower took place at Audrey’s former home in Doorn, Holland.

Audrey Hepburn was engaged to James Hanson n 1952, but she called it off after realizing that their careers were keeping them apart. After that, she briefly dated Hair producer Michael Butler.

She married Mel Ferrer, her Ondine co-star in 1954 in Bürgenstock, Switzerland. They were preparing for the film War and Peace. Following that, she had two miscarriages before taking time off to allow the third pregnancy to be successful. Sean Hepburn Ferrer was born in 1960. Fourteen years later, Mel and Audrey divorced in 1968.

Audrey Hepburn married Italian psychiatrist Andrea Dotti in 1969, and Luca Dotti was born the year after. The marriage lasted thirteen years; they were divorced in 1982. She then went into a relationship with Roger Wolders, a Dutch actor.

Audrey Hepburn was diagnosed in Los Angeles with pseudomyxoma peritonei, a rare form of abdominal cancer at its terminal stages. She was flown in private jet to Geneva, where she received hospice care at her home in Tolochenaz, Vaud. Audrey died on 20th January 1993. She was interred at the Tolochenaz Cemetery.