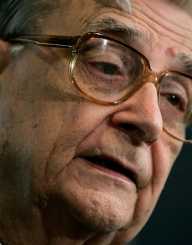 Arno Allan Penzias was born on April 26, 1933, in Germany. His parents were Justine (Eisenreich) and Karl Penzias. He also had a younger brother, Gunther. The family was Jewish, and with the rise of the Nazi party in the 1930’s and 40’s, the family was deported to Poland. Arno and Gunther later left Poland, finding safety in England. Shortly after, their parents joined them. The family was reunited and moved to the United States, where Arno and the rest of his family would go on to spend most of their lives.

Once in the United States, Arno Allan Penzias began attending the Brooklyn Technical High School. He stayed here until he graduated in 1951. Following his graduation, he went on to attend the City College of New York. His studies here focused on several types of sciences, but he ended up graduating from this school with a bachelor's degree in physics.

After graduating, Arno Allan Penzias spent two years working with the United States Army. He did not see combat. Instead, he worked as a radar officer. His time here earned a research job at the Columbia University Radiation Laboratory. While working for the Laboratory, he also continued his studies. He worked mostly on this thesis work while he was here. He later earned his Ph.D. in physics in 1962.

After earning his Ph.D., Arno Allan Penzias began working at Bell Labs. Here, he did mostly research work. He worked with another accomplished scientist, Robert Woodrow. Together, they worked with microwave receivers, which are not the same thing as microwave ovens, as they are used in astronomy. By using this technology, the team heard strange noises coming from space that started a mystery that would last for years.

The strange noises from space interest Arno Allan Penzias and his coworkers since it was so mysterious. Some places in space, like the Milky Way, give off radiation that makes noise, but this noise was different. The scientists involved with this project were struggling to find out where the noise was coming from or what could be making this noise. For years, Arno Allan Penzias and his fellow scientists made their own theories about what the noise could be. The most popular theory was that the noise was from radiation left over from the Big Bang. This theory was later accepted, which helped scientists to learn more about the Big Bang (or at least it added more information to prove that it might have happened). This discovery was later known as cosmic microwave background radiation. Penzias is now best known for this discovery.

In 1972, Arno Allan Penzias was promoted to head of the Radio Physics Research Department within Bell Laboratories. He worked here for four more years before retiring.

After his retirement, he began to focus on mostly independent research. Even though he had retired, he was made the director of the Radio Research Laboratory in 1976. Three years later, he was still involved with Bell Laboratories, now working in the communications sciences research division.

In the 1980’s, Arno Allan Penzias was still working on his independent research. In 1981, he became the vice-president of Bell Laboratories. Arno Allan Penzias is currently a venture partner of New Enterprise Associations. This group works with investors in various fields.

Throughout his career, Arno Allan Penzias has written some articles for Science magazine. Some of his most famous works are listed below.

Arno Allan Penzias is a  fellow of the American Academy of Arts and Sciences.