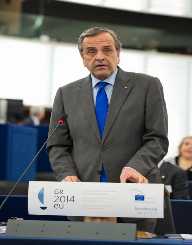 Antonis was born in a wealthy family, and he was accorded lavish upbringing. Besides his political career, he was a successful tennis player. He won the Greek Teen Tennis Championship when he was seventeen years old for his outstanding performance in tennis.

Samaras was privileged to attend the Harvard University where he acquired his Masters in Business Administration. Immediately after coming back to Greece, he started a business called Pizzeria which was very successful. He began his political career when he became an MP for New Democracy when he was twenty-six years. He peaked when he was elected the Prime Minister of Greece.

Antonis Samaras was born in Athens to Dr. Konstantinos Samaras, a Professor of Cardiology, and Lena Zanna, a maternal granddaughter of author Penelope Delta. He had a brother, Alexander, who is an architect.

Antonis’ family was wealthy, and he grew up with several mentors. His paternal uncle, George Samaras, was a Member of Parliament representing Messina for a relatively long time (1950's to 1960's).

As a teenager, he enjoyed playing tennis and won an award in the Greek Teen Tennis Championships.

Antonis Samaras attended Athens College, which was founded by his maternal grandmother. He later joined Amherst College where he graduated in 1974 with a degree in economics. While in Amherst, Antonis met George Papandreou, former Prime Minister of Greece. They became friends and even shared a room, they, however, became political rivals in the Greece political scenes.

Samaras then enrolled at the Harvard University, for his Masters in Business Administration, from where he graduated in 1976.

Antonis Samaras was elected the Member of Hellenic Parliament to represent Messenia in 1977. Two years after, he was appointed the Minister of Finance. The New Democracy Prime Minister by then, Konstantinos Mitsotakis nominated him to work as the Minister of Foreign Affairs. Antonis lost the position in 1992 after he instigated the "Macedonian Question" which put Greece in a tricky diplomatic situation.

In 1992, Antonis formed his party and named it Political Spring. His new party attracted one of the New Democracy Member of Parliament who defected to the new party. This resulted in the fall of the government from power in 1993.

The party participated in the 1993 general election and gained 4.9 % of the total votes cast and achieved ten seats in the parliament. The party's popularity, however, started declining and in 1999 European Parliament Elections, it failed to clinch the required threshold of 3% to elect Members of Parliament. The party was dissolved in 2004, and Antonis Samaras went back to the New Democracy Party.

In 2007, Antonis Samaras resigned from the European Parliament after he was elected to Greek parliament for Messenia. Two years later, he was appointed the Minister of Culture where he started a new museum called Acropolis. He was reelected in Messenia in 2009. In the same year, the New Democracy Party lost the legislative election. As a result, Kostas Karamanlis gave in and resigned as head of the party.  His resignation led to a leadership race, and Samaras ran for the post, he was elected the leader of New Democracy Party.

In 2010, he expelled Ms. Bakoyanni because of defying the party line and voting against the party's decision.

Antonis Samaras remained vocal in politics of national interest, on 5th November; the government won a vote of confidence in parliament narrowly. Antonis pushed for immediate resignation, a coalition government was formed and later, George Papandreou resigned as Prime Minister of Greece.

The New Democracy party grew to become the biggest party in the Hellenic Parliament after an outstanding performance in the May 2012 legislative election. This made the Greek President, Karolos Papoulias, uncomfortable and he pleaded with Samaras to form a government. Antonis, however, announced he was giving up the mandate to form a government. Legislative elections were held again in June 2012, as expected, the New Democracy performed even better and scooped 129 seats, compared to 108 in the May election.

Antonis Samaras married Georgia Kritikos who was from an affluent family of a businessman Akis Kritikos, who owned a canning company "Kyknos." They met in 1989 at a political gathering and married in 1990. They have two children, a son, and a daughter.