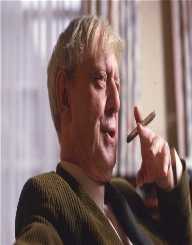 Anthony Burgess was a famed English writer born on February 25th, 1917. He is also to be remembered for his poetic prowess and his exceptional skills as a composer. His place of birth was in Manchester, England. Throughout his writing career, he produced 33 novels and 25 pieces that were non-fictional.

Anthony had over 250 musical works under his name. Some of the novels that he was famous for include Inside Mr. Enderby, A Clockwork Orange, Earthly Powers, and The Wanting Seed. A Clockwork Orange was later adapted in one of Stanley Kubrick films in 1971. He died in 1993 at the age of 76.

John Anthony Burgess Wilson was born in 1917 in Manchester, England. His parents were Joseph Wilson and Elizabeth Wilson. Shortly after his birth, the influenza pandemic of 1918 affected his mother and sister, killing them both one after the other in a few days’ time.

Burgess was born talented as both his parents were skilled in music. Joseph was a piano player whereas his mother was a dancer and a singer at the same time. While still young, Burgess gave out his poems for publications. When he was 18 years, he taught himself how to play the piano. He also went ahead to make a composition for his symphony.

Later, Anthony Burgess schooled at the University of Manchester. He contributed a lot to the school’s magazine. It is in his period at the university that he met Llewela (Lynne) Jones. She was going to be his first wife. In 1940, Burgess graduated with an English degree.

In 1940, Anthony Burgess was recruited in the Royal Army Medical Corps. Before his enlisting, he had spent six weeks as a trainee in Eskbank. During this time in his career, he used to submit his poetic works to the Army publications. He also included his film reviews for publication purposes. Burgess took charge of 54th Division Entertainment Section as their musical director.

In 1946, Burgess left the military. Immediately after this, he landed teaching jobs in Bamber Bridge Emergency Training College and Mid-West School of Education.

A few years later, in 1950, he took up the role of an English teacher in his new school, Banbury Grammar School. While teaching at Banbury, he managed to complete his novels. Unfortunately, he did not publish them since he failed to land his hands on a publisher.

Anthony’s teaching career went on even after moving to Malaya in 1954 with his first wife, Lynne. Soon, he was a teacher at the Malaya College. After this, he published Time for a Tiger in 1956. This was his first ever publication, and he went on to use the pseudonym Anthony Burgess.

After the first publication, two other books lined up, i.e., Beds in the East and The Enemy in the Blanket. These two books together with his first release, Time for a Tiger, were given the name The Malayan Trilogy. Later on, all the three books were published as a single volume and named The Long Day Wanes.

Upon returning to England in 1959, Anthony Burgess ventured into writing on a full-time basis. Some novels came out with the likes of The Doctor is Sick and Right to an Answer, both in 1960. Two years later he published The Wanting Seed. This novel featured his overseas experiences.

A Clockwork Orange depicted his prowess in languages. Characters featured in this book spoke in a different slang. A Clockwork Orange went on to become one of his famous writings. This was given a boost after the novel was adapted in Stanley Kubrick’s film in 1971.

Burgess’ interest in historical figures was also portrayed after he published Nothing Like the Sun in 1964. This publication was one of his fictional biographies featuring William Shakespeare.

In 1942, Anthony Burgess got married to Lynne Jones. Shortly after, she miscarried their first child after being raped and beaten up. In 1968, he got married to Liana. This occurred after his first wife had passed away.