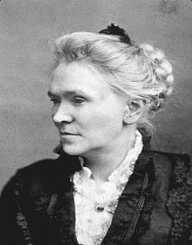 Art historian, writer, and feminist Anna Brownell Jameson was born in Dublin, Republic of Ireland on the 17 May 1794. She was the daughter of the Irish artist Denis Brownell Murphy who specialized in miniature portraits. In 1798 the family relocated to England, settling in London. Anna Jameson was one of five children and was a gifted child who displayed a gift for languages at a young age.

When family fortunes changed, Anna Jameson had to find work, and her first position was that as a governess with the Marquis of Winchester (1810-1814). She was working for the Rowles family in 1819 when she accompanied them to Europe. This trip resulted in her first book and ignited a love of travel. During the European tour, she witnessed an eruption of Mount Vesuvius. By 1822 Anna Jameson was working for Edward John Littleton, caring for his children. She wrote two children’s works during this time: Many coins, Much Coin, and Little Louisa.

Anna Jameson met Robert Jameson in 1821, and they married in 1825. He encouraged her writing, and her A Lady’s Diary was published in 1826. This book is a fictionalized account of her European trip, met with success and established her as a writer.

Her husband was appointed Chief Justice of Dominica in 1829 and Jameson stayed behind in England and continued with her writing. Anna Jameson published The Loves of the Poets (1829), Memoirs of Celebrated Female Sovereigns (1831). Then in 1832, she released Characteristics of Women, a look at Shakespeare’s heroines, in 1932 to wide acclaim. In The Beauties of the Court of King Charles the Second (1833) she illustrated the work with some of her father’s miniature portraits. Anna Jameson continued to travel and an 1829 visit to the continent this resulted in Her Visits and Sketches at Home and Abroad (1934).

Around this time Jameson had evolved into an early feminist concerned becoming interested in improving access to good education for women as well as women’s legal rights.

An established writer, In 1836 Anna Jameson went to live with her husband in Toronto who had been appointed the attorney general of Upper Canada. Jameson left Canada in 1837, visiting the United States, then returning to England, having worked out a separation agreement with her husband.

Winter Studies and Summer Rambles in Canada was published in 1838, and she began work on a six-volume work cataloging Christian art entitled Sacred and Legendary Art.

Anna Jameson spent her later years in London where she was a close friend of Robert and Elizabeth Barrett Browning. She mentored the founders of The Englishwoman’s Journal at Cambridge University, continuing her interest in feminism.

She married to lawyer Robert Jameson in 1825. When he was appointed the attorney general of Upper Canada in 1833, he asked her to join him, and she spent some time there before returning to England. The couple had agreed to a permanent separation in 1837 and did not reconcile. They had no children.

Her Winters Studies and Summer Rambles is considered a classic in early Canadian literature. Her book provides an account of society leading up to the Rebellion in Canada (1837) as well as a look at colonial society and Aboriginal life and culture at the time from a European woman’s point of view.