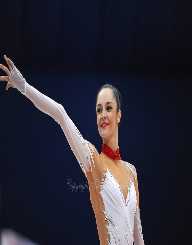 Anna Bessonova was born on the 29 July in 1984. Her parents are Vladimir Bessonova and Viktoria Serikh. Vladimir was a well-regarded soccer player. Bessonova’s mother was involved in world-class gymnastics and encouraged her daughter’s ambitions. She has one sibling, a brother, who is her manager.

Anna Bessonova started doing rhythmic gymnastics at an early age. Her coaches were Albina and Irina Deriugina from the Deriugina School, a mother, and daughter team.

Anna Bessonova came to attention in 2001 when she participated in the World Championships in Osaka, Japan. Bessonova initially did not win a medal. Then, the gold and silver medalists in her event were stripped of their medals, and she moved up to fifth place, winning a bronze medal. In 2002, as part of the Ukrainian team, Bessonova won gold in New Orleans. Later in the year, she did well at the World Cup in Stuttgart winning the hoop, rope, and clubs.

Anna Bessonova was appointed the leader of the national team in 2003. That year she won gold and silver at the World Championships in Budapest. At the European Championships (2003) she won three gold medals for hoops, club and ribbon events. And again, at the 2003 Grand Prix tournament in Switzerland, she won three gold medals; for the circle, decoration and all-around.

In 2007 Anna Bessonova became world champion at the World Rhythmic Gymnastics Championship in Patras, Greece winning the all-around gold medal. She had a good year in 2008 and won gold at the LA Lights, Kiev World Cup, and Miss Valentine competitions. At the World Cup (2008) Bessonova won a total of fifteen medals. At the Beijing Olympic Games (2008), she won the all-around bronze medal. She came first in the all-around at the Kiev World Cup and Deriugina Cup in 2009, then won bronze in the World and European Championships. At the Universiade (2009) she won four silver medals.

Anna Bessonova is involved in promoting the sport in Ukraine by encouraging young people to get involved.

Since her retirement from gymnastics, Anna Bessonova has worked in the media as a television presence and commentator. In 2009, she appeared in Dancing for You. She also worked as an editor of a magazine. Bessonova looked at the 2013 World Championships and gave a rhythmic gymnastics display at part of the opening ceremony.

Anna Bessonova was banned for two months in 2002 after she tested positive for norephedrine at a competition in France.