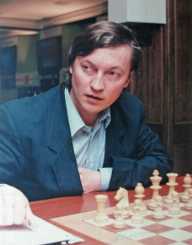 Anatoly Karpov was born on May 23rd, 1951 in Zlatoust, Russia. He is famous for being a chess grandmaster and that he was the former world champion in the sport. Right from the time Karpov was young, he showed a strong liking to the chess game. By the time he was 19 years old, he had become a grandmaster.

He first became the world champion in 1975. This is a title that he held on to until 1985. During his reign, he earned global recognition for his mastery into the game. Moreover, he also received numerous monetary rewards for his remarkable skills.

Anatoly Karpov was born on May 23rd, in 1951. He developed a particular interest in chess at the tender age of 4 years. His chess mastery was unique as by the time he was 11; he rose to become a Candidate Master. At the age of 12, his passion for the chess game landed him into Mikhail Botvinnik’s prominent chess school.

During this time, the chess legend Botvinnik claimed that Karpov had little or no information relating to what chess is. With time, Karpov took chess lessons from Botvinnik which helped him a lot in rising quickly and mastering the game at the same time. At the age of 15, Karpov was recognized as the youngest ever Soviet National Master.

Anatoly Karpov continued to surprise many with his prowess in the chess game. He entered into his first international tournament and defeated Viktor Kupreichi. In Groningen, 1967, he was crowned the winner of European Junior Championship. His exceptional academic performance in high school also earned him a gold medal. This prompted him to enroll at Moscow State University where he could study mathematics. With time, he switched and studied economics at Leningrad State University.

One of the main reasons for transferring from his first institution was to live closer to his chess mentor and tutor Semyon Furman. In 1969, Karpov broke another record after winning the World Junior Chess Championship. He was perceived as the first Soviet player to win this title. A year later, he earned his grandmaster title for emerging fourth in an international tournament that was held in Caracas, Venezuela.

In 1971, while playing chess as an adult professional, high school was part of Alekhine Memorial chess competition that was held in Moscow. During this event, he won this competition leading to improving his Elo Rating. At first, he had been rated at 2540 in 1971, but this quickly rose to 2660 by the time 1973 approached. During the same year, in 1973, he defeated Viktor Korchnoi at the Leningrad Interzonal Tournament.

Anatoly Karpov had a strong determination to prove himself as the world’s best chess player. As a result, he competed in all major tournaments that he heard of. He took over as the chess world champion in 1975 following a heated competition that was held in Milan. This was the beginning of his winning streak which cemented his dominance in the game.

In 1984, Anatoly Karpov competed against Garry Kasparov during the World Chess Championship. This contest led to several draws within the game which resulted in the continued match between the two that lasted for about five months. The game never ended as the president of the chess federation suspended the game claiming that players’ health was deteriorating. This worked in favor of Karpov as he retained his world champion title.

The following year, Anatoly Karpov competed against Kasparov and succumbed to his first defeat. During the next competitions between his rival, he was not successful. This was in 1986, 1987 and also in 1990. Later on, in 1993, Karpov claimed back his world championship title. This occurred due to the mere fact that his most significant rival had left the competition. He reigned as the champion until 1999.

Anatoly Karpov wedded Irina Kuimova as his first wife, and they had a son together. His second marriage was to Natalia Bulanova. He also had one girl child in this relationship.