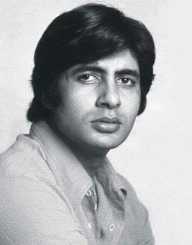 Amitabh Bachchan was born in the Indian city of Allahabad in the month of October in the year 1942. At the time, India was still a British colony and did not achieve independence until five years later. His mother, Teji Bachchan was known as a Sikh jet setter while his father was a Hindi poet of wide renown, Dr. Harivansh Rai. Amitabh was his parent’s first born and has one younger brother, named Ajitabh.

Bachchan attended the Sherwood College boarding school before joining in Delhi University, where he obtained his Bachelor of Arts degree. After he had graduated, he became a cargo broker in Calcutta. After spending a few years in Calcutta, Bachchan was ready for a change.

Bachchan decided to move to Bombay and take a shot at the Bollywood show business. At this time, India had become independent for nearly two years and Hindi cinema was booming.

After being advised by his mother in 1969, Amitabh Bachchan made his Hindi cinema début. His baritone voice was on demand on the set of “Bhuvan Shome” which was directed by the reputed Mrinal Sen.

The talented actor went on in 1971 to play supporting role to the more popular Rajesh Khanna in the movie “Anand”. The actor’s portrayal of a cynical doctor was critically well received. He reprised this role in more movies such as “Parwanna”, “Reshma Aur Shera”, as well as in “Guddi” starring Jaya Bhaduri.

He was joined together with Jaya Bhaduri and was supported well by Pran. The movie proved to be a big hit and Amitabh became known as Bollywood’s “Angry Young Man”

Amitabh’s depiction as the friend of Rajesh Khanna’s character in “Namak Haraam” directed by Hrishikesh Mukherjee once again won him many awards. The brilliant actor during the next two years starred in box-office hits such as “Majboor.

Performing in all movie genres, he had shown to the world of cinema that he was poised to make a mark.

The year of 1975 proved a crucial one in Amitabh’s career, with the release of two unusual movies, “Sholay” and “Deewar. “Dewaar” featured Neetu Singh, Nirupa Roy, and Shashi Kapoor, “Sholay” had collective cast. This integrated Jaya Bachchan, Hema Malini, Dharmendra, and Sanjeev Kumar. The box office earnings came to INR 2, 364,500.

In 1976, the star Amitabh Bahcchan acted in the movie “Kabhie Kabhie” by Yash Chopra, where he portrayed a romantic character, where he falls in love with a woman who marries someone else. The love-triangle movie also featured Shashi and Kapoor and Rakhee, both huge actors of the time.

The following year, he played the character of Anthony Gonzalves in “Amar Akbar Anthony”, beside Vinod Khanna and Rishi Kapoor, it wrapped the movie’s destiny as a top box office earner.

The actor’s Baritone Voice was reflected to be Bachchan’s most significant asset; it caught the attention of “Academy Award” winning filmmaker of Bengali hue called Satyajit Ray. Amitabh worked with Ray in the following year on a number of projects.

On July 26, 1982, while on a scene in the movie, “Coolie”; Amitabh Bachchan was injured badly on set. After taking a break he shot the rest of the film and it was out the next year. “Coolie” was well acknowledged and became the most admired movie in the same period.

In 1983, he started suffering from an autoimmune neuromuscular disease called Myasthenia Gravis. This hindered his work as actor. Throughout this time, he took a break from acting and paddled in politics for the following few years.

By the turn of 1984, the actor moved into politics as a supporter for the Indian Prime Minister Rajiv Gandhi. He won the eighth Lok Sabha elections with the support of the Allahabad population. However, he retired from politics three years later.

The year 2000-2005 saw Amitabh Bachchan’s comeback in the Bollywood cinema, along with blockbusters such as Ek Rishtaa: Bond of Love and “Bunty Aur Babli”

During the same period, the talented actor presented a TV show called ‘Kaun Banega Crorepati’ (‘KBC’). He was a hit here as one of the most watched television programs in India. The show was scripted from the English game show “Who wants to be a millionaire?” hosted by TV presenter Chris Tarrant.

In 2005, he contributed the voice-over for the ‘Academy Award’ winning French documentary titled “March of the Penguins” by Luc Jacquet.

The next few years saw the great actor in movies such as ‘Baadal’, ‘Sarkar’, ‘Nishabd’, ‘Kabhi Alvida Naa Kehna’, ‘Shootout at the Lokhandwala’ and ‘Cheeni Kum’. ‘Sarkar’ was roughly based on Mario Puzo’s successful novel ‘the Godfather’.

The next year the movie star presented ‘Bigg Boss’ a national television reality program. He also starred in a successful movie ‘Paa’ where the 67-year-old performer portrayed the role of a 12-year-old child suffering from an unusual degenerative illness called ‘Progeria’.

Amitabh Bachchan is also known for his charitable activities, including his financial assistance of Rs.11 lakhs and Rs. 30 lakhs to farmers in Andhra Pradesh and Maharashtra respectively.

In 2002, UNICEF chose the actor as the ambassador in their campaign for polio abolition in India. Currently he still appears in all their TV campaigns advising young mothers to vaccinate their newborns with the life-saving polio drops.

Recently in 2013, the actor established the ‘HRB memorial trust’, named after his father as well as a couple of other humanitarian organizations.

The following year he played in the Hindi TV series ‘Yudh’, essaying the personality of a businessman.

In 1973, Amitabh Bachchan married Jaya Bhaduri a famous actress who was admired even before her husband catapulted to fame. The couple together have a daughter and a son, named ‘Shweta’ and ‘Abhishek’.