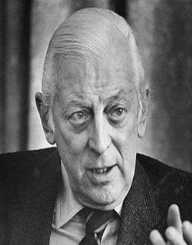 Alistair Cooke was a British-born American journalist and television personality.

Alfred Cooke was born in the county of Lancashire, England, on November 20, 1908. His father, Samuel, was a Methodist preacher and a blacksmith. His mother, Mary Elizabeth, had Irish Protestant origins. He attended the Blackpool Grammar School. He then won a scholarship for the University of Cambridge, where he was active in the arts. He graduated with a degree in English in 1930. At the age of 22, he changed his name to Alistair. In 1932, he won the Commonwealth Fund Fellowship. It allowed him to spend some time studying at Yale University and Harvard University.

Alistair Cooke began his career as a film critic for BBC. He also served as an advisor for proper pronunciation. He soon became the British correspondent for the American network NBC. Each week, he created a 15-minute radio talk about life in Britain, aimed for American listeners. The series was called London Letter. The most important topic he covered at the time was the abdication of King Edward VIII.

In 1937, Cooke moved to the United States. He started working on a radio talk opposite of London Letter. It was called Mainly about Manhattan, and it covered American life, aimed for British listeners. The project was cancelled after a year because of the start of World War II. In 1941, he became an American citizen.

Alistair Cooke started to travel around the United States during the war. He recorded the life of ordinary people and their reactions to the current events. He published his findings in a book called The American Home Front: 1941-1942.

In 1946, Cooke decided to start his weekly radio broadcast. It was called American Letter, and it was broadcast through the world by the BBC World Service. Four years later, the name changed to Letter from America. The series became very popular, and it ran for a total of 58 years, until 2004. The texts from some of the broadcasts were collected in two books. They are called One Man’s America, published in 1952, and Talk About America, in 1968.

Alistair Cooke became a correspondent for different British newspapers, including The Guardian. He covered various topics, such as the boycott of Rosa Parks and Martin Luther King. In 1952, he started hosting the series Omnibus on CBS. It featured appearances from prominent figures in the arts. In 1971, he became the host of Masterpiece Theatre. He presented British television dramas to American audiences.

In 1972, Cooke showed up in the 13-part series America: A Personal History of the United States. It was broadcast in both the United States and the United Kingdom. The show gained plenty of success. A book based on it was published soon after, and it became a bestseller.

Alistair Cooke also wrote biographies and books based on events he investigated. They include Douglas Fairbanks: The Making of a Screen Actor, Generation on Trial, America Observed, and others.

In 1973, Cooke received an honorary knighthood for his contribution to Anglo-American cooperation. After his death, the Fulbright program introduced the Alistair Cooke Award in Journalism. It supports British students who study in the United States and vice versa.

Alistair Cooke was engaged to Henrietta Riddle, the daughter of actor Henry Ainley. She later broke off the engagement. In 1933, he married Ruth Emerson, a descendant of prominent author Ralph Waldo Emerson. They had a son named John. They got a divorce after ten years of marriage. In 1946, he married the portrait painter Jane White Hawkes. They had a daughter named Susan in 1949.

Alistair Cooke suffered from heart disease and lung cancer which spread to his bones. He died on March 30, 2004, at the age of 95. He was cremated, and his family scattered his ashes in Central Park.

A year later, the New York Daily News reported that the bones of Cooke and other people were removed before their cremation. They were sold for making medical-grade bone grafts. The thieves were working for Biomedical Tissue Services, a tissue-recovery firm. The chief and two employees were imprisoned, and the company was shut down.