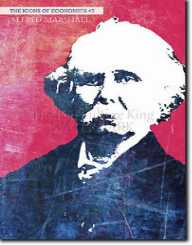 Considered one of the greatest economists of all-time, Alfred Marshall was from England.

Alfred Marshall is the author of the extremely popular book, Principles of Economics, which was mandatory reading for young economists for many years in England.

Alfred Marshall specialized in microeconomics. He is known to have based his economic theories on rigorous mathematics, but he always presented his ideas in a manner that readers could understand them in layman terms.

Alfred Marshall was born on July 26, 1842, in London. His star sign was Leo. His father Billy Marshall was a bank employee. His mother’s name was Rebecca.

Marshall’s father was an evangelist and wanted his child to observe the strict rules of his religion. Young Alfred was obedient for most of his early life. Economically he had a comfortable childhood and received the best education available.

Alfred Marshall went to the Merchant Taylors School and later the St John’s College encampments. He was extremely skilled in mathematics, and physics. However, he left the field of science and switched to philosophy after suffering from a mental illness.

Alfred Marshall became interested in economics because he observed that economics was supposed to improve the living conditions of the poor and middle class.

Alfred Marshall became a lecturer at the St John’s University, Cambridge in 1860. He had to obey the laws of celibacy to continue to be a fellow there. In 1877, however, he fell in love and married his student, Mary. Marshall left his position as a fellow of St John’s College after his marriage did not comply with the celibacy rules at the University.

While he was at Cambridge, he got the opportunity to work with several accomplished thinkers like Clifford, John Neville Keynes, John Maynard Keynes and Henry Sidgwick. In the year 1885, Alfred Marshall became the Professor of political economy at the same college and continued on this job till he retired. Much of Marshall’s career was devoted to arts improving the ideas and mathematical basis of economics. He was instrumental in projecting economics as a scientific subject.

In 1881 Alfred Marshall began writing the Principles of Economics. He was very detailed and soon realized that the work would expand to two volumes. However, he took about ten years to finish the first volume only in the year 1890. Alfred Marshall was seen as a brilliant economist after the release of the Principles of Economics. The book became one of the most recommended textbooks to study economics in the Inland for many years.

After the publication of Principles of Economics, Marshall extensively worked on completing the second volume of his book. But he never finished it.

After 1908, he began experiencing severe health problems, and this slowed him down.

Alfred Marshall married Mary Valley who was his student. They were married in 1877, as a result of which Marshall had to leave is fellow’s Fellowship at the St John’s University.

They remained married till his death in 1924. Mary collaborated with Marshall on several of his books.