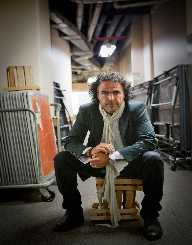 Alejandro Gonzalez Iñárritu is an award-winning Mexican screenwriter, film director, and a producer. Born on August 15, 1963, he became the first Mexican director to earn a nomination for the Directors Guild of America Award for Outstanding Directing andAcademy Award for Best Director in 2006 for his work “Babel.” Iñárritu made a directing feature film debut with AmeresPerros in 2000 and has since directed several other films including Biutiful, among others. His films have generally received positive response and acclaim, winning five Academy Awards.

Iñárritu’s won three Academy Awards in 2015 including Best Director, Best Picture and Best Original Screenplay for his work “Birdman or (The Unexpected Virtue of Ignorance” in 2014. In 2015, he directed the film The Revenant that won him the second Academy Award for Best Director. This made him the third director to win the category back to back. In 2017, his virtual reality project “Flesh and Sand” won him a Special Achievement Academy Award.

Alejandro Gonzalez Iñárritu was born on August 15, 1963, in Mexico City to Luz MaríaIñárritu and Héctor González Gama. He is the youngest of seven children by his parents. He grew up in the area of Narvarte. He dropped out of school because he could not focus on education. At the ages of 16 and 18, he traveled through Europe and Africa across the Atlantic Ocean while working on a cargo ship. He acknowledges these early travels have great influence on him in filmmaking. Sailing across different countries, he returned to Mexico City to further his education, enrolling at Universidad Iberoamericana. He majored in communications.

After graduating from school, Iñárritu started a career as a radio host in 1984. He worked for the Mexican radio station WFM. He did not just host but also wrote and broadcast audio stories and storytelling promos. He later ventured into television working for Televisa, as youngest producer. It was during this time that he became close to Mexican writer Guillermo Arriaga and that commenced their screenwriting collaboration. Iñárritupartnered with Raul Olvera to established Zeta Films (Z Films), a production company in 1991. Iñárritu started writing, producing, and directing advertisement and short films. He later studied under theatre director LudwikMargules and Judith Weston and ventured into film and television directing. His debut television pilot for Z film was Detrás del dinero, (Behind the Money) starring Miguel Bose in 1995.

Alejandro Gonzalez Iñárritu debut feature film as a director was Amores Perros, 2000, co-written with Guillermo Arriaga. The film premiered at the Cannes Film Festival later that year, receiving Critics’ Week Grand Prize. It was also nominated for the Academy Award for Best Foreign Language Film. His next feature film was 21 Gram, 2003 starring Sean Penn, Benicio del Toro, and Naomi Watts. The film had a nomination at the Venice Film Festival with actor Penn winning the Volpi Cup for Best Actor. Actors Benicio del Toro and Naomi Watts also received a nomination at the 76th Academy Awards. The film also ended the writing collaboration between Iñárritu and Guillermo Arriaga.

Babel And Other Successes

His next successful work was different and producing the film Biutiful, 2010. It was written by Iñárritu, Nicolas Giacobone, and Armando Bo Jr and starred Javier Bardem. Buitiful was very successful and received nominations at the 2011 Golden Globes for Best Foreign Language Film, and BAFTA Awards for Best Film Not in the English Language and Best Actor. It also received a nomination for Best Foreign Language Film at the Academy Awards with actor Javier Barden being nominated for the Academy Award for Best Actor.

Birdman And The Revenant

Iñárritu co-wrote, co-directed and co-produced Birdman or (The Unexpected Virtue of Ignorance), in 2014. The film, co-starred Naomi Watts, Edward Norton, Michael Keaton, Andrea Riseborough and Zach Galifianakis. It was about an unsuccessful actor famous for playing a superhero role who tries to revive his career by staging a play set on Raymond Carver’s short story What We Talk About When We Talk About Love. Birdman was very successful winning an Academy Award for Best Directing, Best Picture, and Best Screenplay and the Golden Globe for Best Screenplay.

Alejandro Gonzalez Iñárritu is married to an editor and graphic designer Maria Eladia Hagerman. They have a son called Eliseo.