What Is The Sacral Chakra?

How to Understand And Balance the Sacral Chakra

Everyone seems to want something to do with this chakra, deep down inside. The force of attraction in your chakra system lies here, in the Vestal, sacral or Spleen Chakra. What is it, where is it, and how can you use it?


I’ll be straight, here: Your vestal chakra is said to be in your perineum, the space between your anus and your sexual organs. However, the Svadhisthana chakra in Hindu practice, from which this chakra is derived, was actually located at the clitoris or the base of the penis. You already know what this chakra governs, I am sure – the Vestal chakra governs the force of sensuality, sexual attraction, and base instinct in a person.
advertisement
advertisement

The Sacral chakra is a contentious chakra, as opening it up leads to a greater understanding of one’s own sexuality and sex in general. Many modern religions frown upon sex, and actively push for people to be ignorant about it and the processes associated with it, but before those religions came and mucked everything up, sex was seen as one of the greatest acts in a human’s life. It is the act that brings us humans the closest to the creation force, as by performing it, we are evoking life itself and putting it into a new human being. This is the chakra that governs the lust and primal nature in everyone.

If you have children and are teaching them about their chakras, then this writer assumes you are doing so in full disclosure and with intelligent conversation. That said, the meditation to help open the chakra which will be explained here may not be appropriate for children to perform. Parental discretion is highly advised.

An opening meditation for the vestal chakra will by its nature center on the lust and pleasure associated with the region of the body in which it lies, but be aware that the vestal chakra is also the chakra of opposites and opposing forces, and the energy that flows from it can be channeled and harnessed in ways that are less lascivious and more creative. 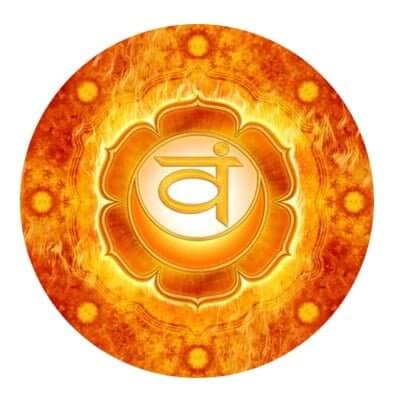 Remove any clothing that feels restrictive, or indeed that you can feel at all, and sit with your painting surface in front of you, in easy reach. Focus your mind on the location of the chakra, and breath slowly. Feel a heat beginning to generate from the chakra, and feel it rise up in your body. Visualize it like a channel, which flows directly from the source down your arm and into the brush.

Think of this like stream of consciousness writing, but one step further into the primal – with no word to constrict the flow, let the brush dance across the canvas. If you find yourself becoming aroused in the process of this creative flow, that’s good! Encourage that feeling, let it build up and push your conscious mind further and further into the primal realm it knows from birth, let it manifest however it must, and never let the brush stop moving.

Even if the canvas ends up just a smudged, splattered, and smeared mess, that’s not what is important. The energy channeled from your vestal chakra to the canvas is the focus. You may open your eyes and look at something you did not consciously create on the canvas. When that happens, your meditation is finished. Repeat this meditation until you can summon up that ecstatic state of instinctual creation in less and less time, eventually calling it on command. That’s the effect of an open chakra. Creativity, impulse, and appreciation for the thrill go through the roof.

Share
Previous How To Calculate Varnada Lagna?
Next Jyeshtha Nakshatra