Pluto in the Twelfth House of the Natal Chart

What does Pluto in the 12th house mean? You love to try something new all the time.

You have demons to deal with from Pluto in the twelfth house, and you go through several transitions throughout your lifetime. Change is a good thing, for it helps you grow and learn how to manage problems. Otherwise, you would lack the maturity to deal with life in general.

Pluto symbolism in astrology stands for regeneration, renewal, power, control, and obsession. Because of your incredible intuition in the twelfth house, you can read between the lines and see deeper into any dark situation. You are always interested in analyzing conflicts when they arise, and you want to find out why they happen. You also want to know the resolution that fits best, and you look at both the positive and negative aspects of the conflict in your marriage or career. 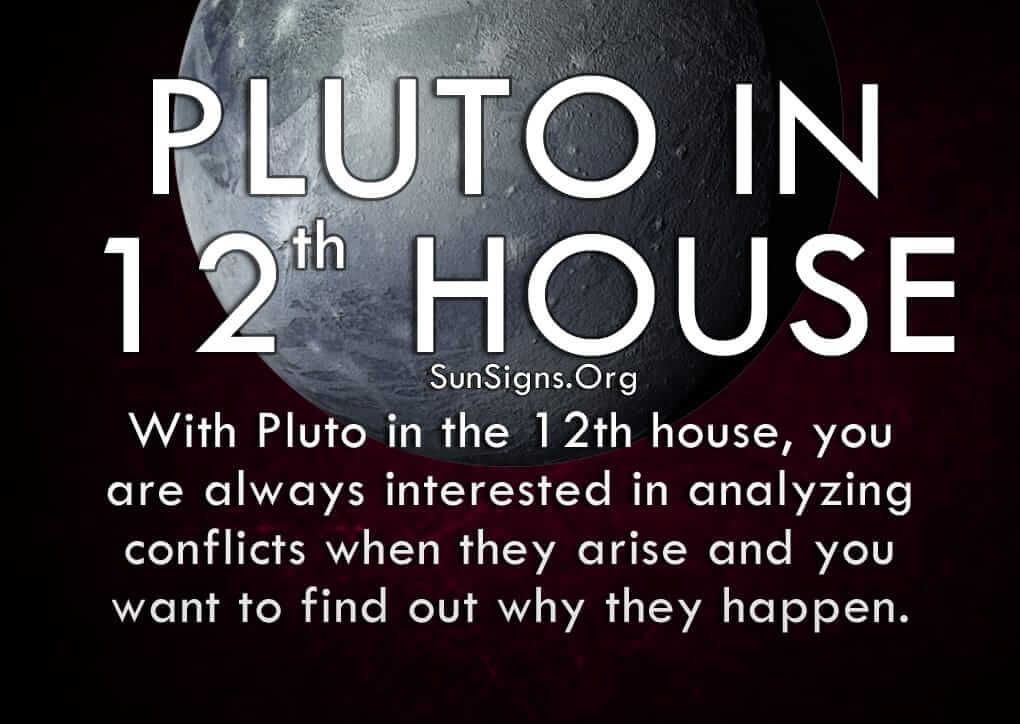 You’re afraid that nothing and no one can save you from yourself if you have Pluto in the 12th house. But that’s a fear you tend to blow way out of proportion. It’ll take time and effort, but it’s never too late to make a change or several changes in your life. Rather than acting on the fear that Pluto can place in your heart, utilize Pluto’s desire for rebirth and rejuvenation. Find your Pluto sign to know more.

Focus on the positive aspects of your life and use that optimism to change the negative things. Don’t run from your inner thoughts and desires. Face them head-on and figure out what you want in life. Clean out the old fears and replace them with new hopes and dreams. Your imagination is limitless, so use it to your advantage. You’re able to walk in someone else’s shoes and offer them sympathy and guidance, which makes you a very effective counselor.

But you don’t want people to see any weakness in you, especially since you lack the self-confidence to follow through on things. So Pluto, in twelfth house personality, tries and hide their emotions, focusing on other people’s problems to take the attention off of theirs. You hate the feeling of not having control over anything in your life, so you try to ignore those feelings until they go away.

But they never really go away. They only get buried down deep until they rot and bubble up out of control. You have to learn how to manage your emotions effectively, rather than letting them run your life. Those in the twelfth house can easily become anxious or depressed or fall into addictive behaviors to try and escape their feelings of inadequacy. But it’s this demon that you have to overcome, so ask your friends or loved ones for help. Don’t be afraid to lean on them once in a while because you’ve most likely helped them before in their time of need.

In astrology, Pluto is among the most feared planets. It is also a generational planet. Being feared does not give Pluto a good reputation. Pluto in 12th House astrology associates with mysteries, deep secrets, investigations, and things hidden in the universe.

Pluto rules violence, trauma, chaos, pain, and negativity. This planet manifests in bad ways, but its ultimate manifestation is rebirth, regeneration, transformation, and healing. Pluto takes 248 (Two Hundred and Forty-Eight) years to revolve around the sun. This fact makes it spend several years in each of the Twelve zodiac signs.

Pluto in the 12th House and Struggles

People who fall under Planet Pluto tend to have gone through trauma in the past occasioned by people close to them, especially parents. They tend to spend time alone with others and have a problem connecting emotionally with people who might help them.

These people fall prey to people they are close to, so growing up, they form a habit of not opening up about their feelings and emotions. Pluto in Twelfth House children tend to have a problem relating freely with their parents or guardian because they are afraid of being abused.

You might suffer from addiction because you do not know how to express yourself. To take charge of your life, you need to face your problems and find a way of tackling them without hurting yourself or the people around you.

Your Subconscious and Pluto in the 12th House

Being in the unconscious domain, you mustn’t bottle up your emotions because they might cause you or the people around you harm. Indulge in activities that will enable you to get rid of stress and negative thoughts. You find it easier to get in touch with your higher self through meditation than dealing with people who do not understand or pay attention to you.

Pluto in 12th house astrology says that you don’t always deal well with change because the unknown frightens you. It’s only after you are forced to make alterations in your life that you figure out some way to accept it and move on. Even then, there may be lasting resentments or regrets toward people or situations that caused the upheaval.

Depending on what you do with that preference, you prefer fantasy over reality, which can be a good thing or a bad thing. If you use it to hide from your responsibilities, then you will run into trouble. But if you use it to guide you toward spiritual enlightenment, you will find everything you wanted and more.