Pluto in the Eleventh House of the Natal Chart

What does Pluto in the 11th house mean? You have fantastic ideas on how to change the world.

You have strong ideas and beliefs in the eleventh house, and you like to go against the norm. Pluto makes you look at these things, and you feel like you can do better. This attracts a different crowd into your social circle, and most people view you as strange or quirky.

In astrology, Pluto encompasses rebirth, power, subconscious, fear, hidden issues, and control. For those in the eleventh house, you believe in change. You know that for society to move forward, things have to change to progress to a higher state of being. Because of this, you have lofty ideas on how to change the world. As Aquarius is the ruling zodiac sign for this house, you take your humanitarian efforts very seriously. 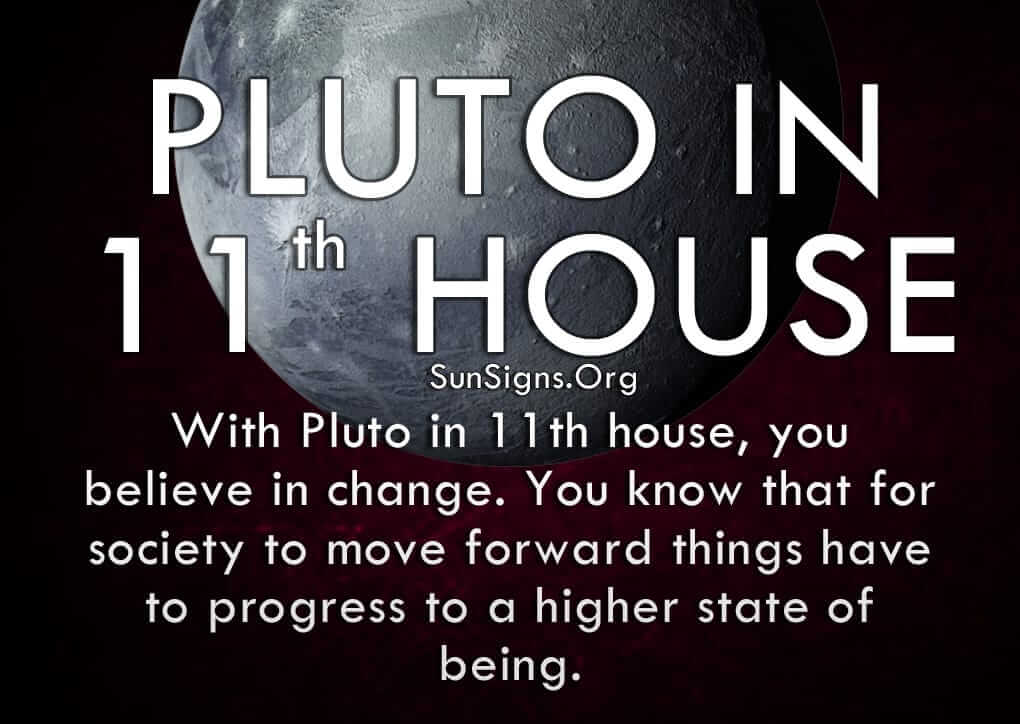 With Pluto in 11th house, you are most intense when it comes to knowledge, and you perceive education to be the most important thing in this world. You can’t stand when people discuss their beliefs or convictions without having all the correct information to substantiate their claims.

You feel it’s your job to point out the inconsistencies in their logic and school them on their ignorance. While this may help to deter misinformation from spreading, your brash manner makes you look like a bully. Be mindful of how you control the flow of information.

You get along well with people from all walks of life for you feel judging people for superficial reasons is wrong. Of course, you are the one who decides what reasons are superficial. It’s a strange dynamic, for you need people to discuss your ideas with, making you a social creature.

People with Pluto in the eleventh house in their astrology chart need to realize that they can’t take control of all the bad things that happen in this world and make them right. The trouble is your large ego makes you feel like you must do so, and you often step in when no one asked you to.

When it comes to larger world issues, more people like you are needed. But when it has to do with simpler, more personal issues, then people can get pretty upset when you barge your way into the conversation and take over the direction of the discussion.

Pluto in 11th house astrology personality should try listening to people first before assuming you know a better answer. And if you do have a better solution try to present it in a way that is more relatable to the general masses rather than lecturing people. Like you can’t control certain events that happen in life, you also can’t control what people choose to do.

Because of this, you pick your friends and romantic partners for marriage very carefully. You have high standards, and you want those around you to live up to them also. This can be pretty difficult if other people feel you’re unreasonable. And you only join a group when you believe their ideas are completely in-sync with yours. The strange thing is, although you are very choosy with your friendships, you are also very open-minded and accepting of those who are different in your career.

But you also shy away from those you feel aren’t genuine, and that can be a lot of people because of your particular morals and ideals. The key is finding those who complement your quirks, not inflate them. While you are a tough person to get along with, those who know you best understand it’s all just part of your desire to reach a higher plane of existence.