Jupiter may be second in line (after the Sun) to rule over the cosmos in magickal astrology, but no other planetary force has captured more attention than Venus in all her alluring, glamorous splendor. Venus is both the Morning and the Evening Star, and, like the cinematic stars of the 1940s, she continues to keep us enthralled.


It is impossible to pigeon-hole or classify this energy. Many people mistakenly think that the Venusian energies are exclusively about love, beauty, attraction, and the softer side of life.

However, Venus is a force of passion in astrology. All the passions are under her sway. In this way, she is also a goddess of war, though when she goes to battle, it is decidedly different than when Mars does.

“Wait a minute!” You might be asking yourself, “Didn’t he say that Mars ruled over the passions and war? What’s going on here?”

If you’re confused, you are not alone.

Though we talk about it in our songs (“Love is a Battlefield”) and we acknowledge it in our folk sayings (“All’s fair in love and war”), many people fail to understand the concept that love and war are intimately tied together when it comes to their own personal lives. 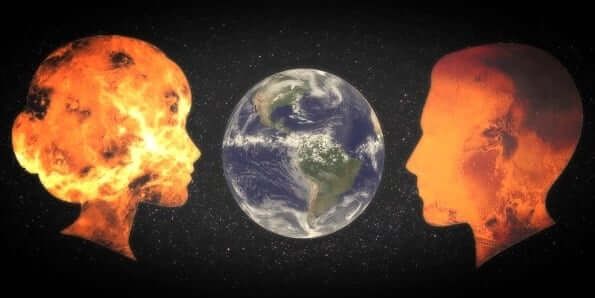 When I was working as a life coach, one of the most sought after areas of my coaching practice was relationship coaching. The biggest stumbling block that I ran across with nearly every new client was a desire to be completely honest and upfront with their dates.

Like the girl who asks “How many children do you want?” on the first date, they wanted to lay all their cards on the table (either in an effort to save time or because they expected unconditional love right from the get-go), and they expected to be accepted and appreciated for this honesty.

Worse than this delusion was the fact that they were offended when their dates ran screaming from the table before dessert. It doesn’t do any good to cry once the milk is spilt. All you can do is acknowledge the situation for what it is and clean it up.

The problem is that love and war are two sides of the exact same coin. If you’re not willing to accept that premise, you will constantly find yourself crying over spilled milk.

Everybody expects a soldier to sustain injuries in the line of duty. Few people realize that the injury sustained during courtship are much more lethal. Nobody would consider going into war completely vulnerable and defenseless, yet nearly everyone wants to do just that very thing in love.

Our fairy tales have encouraged us to willingly disarm ourselves. Women hold out hope that Prince Charming will knock on their door with a glass slipper and take them away from the drudgery of mundane life. Men falsely believe that they are entitled to be the hero of every story that they find themselves written into. Nobody wants to acknowledge that relationships are hard work and that they require real thought … right from that first seemingly magical moment!

We actually have the ancient Greeks to thank for this modern-day confusion surrounding love and war. While we tend to think of Aphrodite as a Greek Goddess, she is actually much older than the Greek culture. Originally, she was a Semitic fertility and war goddess, but the Greeks were uncomfortable with the idea of a strong, powerful, sexually appealing Goddess who reigned over sex, fertility, and war.

So, when they incorporated her into their pantheon, they diminished her capacity so that she was much more manageable. You can see this happening in the ancient Greek literature if you turn to the Iliad, where she is actually ordered off the battlefield.

After that moment, Aphrodite relinquished her dominion over war in the Greek mind, and she became exclusively associated with pleasure, love, and all the other things we now commonly associate with her.

Up until Homer ordered Aphrodite off the battlefield, this merger of love, sex, and war was undisputed common knowledge. The energies associated with Venus have not lost this ancient connection, though we have. If you seek to work with the Venusian energies, you would be wise to investigate this mythic connection further.

In the meantime, it will not do to leave confusion in this series of articles. In Martial Your Forces!, I said, “Actually, Mars rules over the passions – like anger, aggression, war, strife, lust, and many others.” Now, in this article, I’m telling you that “Venus is a force of passion. All of the passions are under her sway. In this way, she is also a goddess of war. Though when she goes to battle, it is decidedly different than when Mars does.” What is the real truth here?

The truth is that both Mars and Venus rule over the passions. The only difference is in their approach. Mars gives into passion in a blind lust or rage. Venus is more cunning and refined. Mars is an unstoppable juggernaut. Venus is more crafty, working indirectly behind the scenes to get the job done. Mars focuses on sex, lust, and the more aggressive aspects of passion. Venus focuses on persuasion, cunning, pleasure, and the softer side of the passions.

If you are contemplating an issue of passion in your own life, you should analyze it a bit deeper to discover whether it falls under the Martial or Venusian domain before you act.