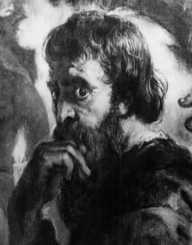 Judas Iscariot was born to Simon and Cyborea Iscariot. There are alternative schools of thought to the meaning of his surname.

Some scholars believe ‘Iscariot' means ‘the man from Kerioth.' The statement supports this belief that Judas was ‘the son of Simon Iscariot.'

On the other hand, other scholars believe ‘Iscariot' to be a derivative of the Latin word sicarius, which means ‘dagger man.' This context referred to members of the Sicarii. They were a group of would-be terrorists who hid their knives under their cloaks before attacking and killing people.

One of the Apostles

Jesus had 12 apostles, of which Judas Iscariot was one.

The main gospels, Matthew, Mark, Luke, and John, also known as the canonical gospels, all list Judas Iscariot as one of the 12.

Judas took an active role as an apostle. He was also the one that looked after the money box and the funds.

Pontius Pilate, the ruler of the day, was looking for a way to arrest Jesus. Judas agreed to identify Jesus to the soldiers arresting him.

His reward for confirming the identity of Jesus was 30 pieces of silver.

The high priests were afraid to have Jesus arrested during the Passover since there may have been riots. To avoid this, they arranged with Judas for it to happen the evening before Passover.

Judas betrayed Jesus with a kiss of greeting.

There are several accounts of how Judas died.

The first is in Matthew 27:1. It states that Judas was full of remorse after his act. The priests refused the money when he tried to return it. Judas committed suicide by hanging.

In the book of Acts, it says that Judas bought a field with the money but had an accident in the field that killed him.

There are various versions of the two accounts, but nobody knows the exact chain of events that happened.