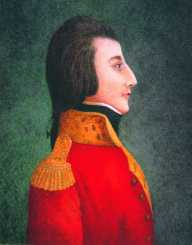 Born as Theobald Wolfe Tone, was a revolutionary person and founding member of the United Irishmen. He was the father of Irish republic and chief of Irish Rebellion.

Theobald Wolfe Tone was born on 20th June 1763. He is now popularly known as Wolfe Tone. His ancestors migrated to England from Gascony in the 16th century. They belonged to a Protestant family. His father was Peter Tone coachmaker. He owned a farm in Sallins, County Kildare. His mother was from a Catholic family but became a Protestant later. His maternal grandfather was a captain of a ship in West India business.

Wolfe Tone joined the Trinity College, Dublin to study Law. He became a member of the College Historical Society debating club. He became its auditor in 1785. He obtained his BA in February in 1786. Tone at the age of 26 qualified as an attorney in King’s Inns and practiced at the Inns of Court in London.

In 1783, Wolfe Tone worked as a teacher to Anthony and Roberthalf - brothers of Richard Martin, MP of Galway. Tone thought of becoming a theatre actor.

Tone proposed to establish a defense colony in Hawaii with the support of William Pitt the Younger. But he did not find any backing. He unsuccessfully tried to enlist himself as a soldier in East India Company.

In 1971, Tone published “A Northern Whig.” He advocated for the independent Irish Republic. He stressed that cooperation between religions in Ireland as the solution to amend the complaints of Irish people.

In a political move, in 1791, he established the Society of the United Irishmen with the support of Thomas Russell, Napper Tandy and others of like-minded people. In 1792, he accepted the responsibility as assistant secretary of the Catholic Committee.

In 1793, an appeal was made to King George III, and re-enfranchisement of Catholics was passed. The Convention approved 1500 pounds to Tone and a gold medal and decided to disband.

Two religious groups in Ulster quarreling with each other tried to weaken the United Irish movement.

In 1794, the United Irishmen association worked with a purpose to defeat the state. At this time an Irish priest, Reverend William Jackson came to Ireland to ascertain whether the Irish people supported the French attack. Wolfe Tone described the situation in communication to Jackson. A counselor who knew of Jackson’s reasons for a visit to Ireland leaked the information to the government. In 1074, Jackson was detained on charges of disloyalty.

The government took into custody the papers of the United Irishmen and the Association broke up. In 1975, Tone immigrated to the UnitedStates. The United Irishmen regrouped again in 1796 and explored the possibility of getting help from France. Tone visited Paris in 1976 and had discussions with De La Croix and Carnot. Tone joined the French army as adjutant-general and supported a proposal for attacking England and commit crimes.

In 1796, Wolfe Tone with the help of the French made an unsuccessful attempt to invade. Again in 1796, tried for a military expedition but failed again. Tone’s effort in 1978, also failed but this time he was taken a prisoner.

Tone faced a trial in November 1798. He spoke about his determination to free Ireland. Wolfe Tone did not ask for forgiveness. He requested the court to permit him to die as a soldier.

The court found Tone guilty and awarded the death sentence by hanging on 10th November 1798.

The surviving son, William Theobald Wolfe became a cadet in the Imperial School of Cavalry in 1810 on the instructions of Napoleon. He accepted the citizenship of France on 4th May 1812.

He first joined the Regiment of Chasseurs and then the Grand Army in Germany.

William immigrated to the United States after the war of Waterloo. In the US he was commissioned as captain of the United States Army. William died on 11th October 1828 at the age of 37. Matilda Tone is cremated in Greenwood Cemetery in Brooklyn.

Wolfe Tone died on 19th November 1798 at the age of 35 in prison in Dublin. He was cremated in Bodenstown, County Kildare at his hometown. National Graves Association is in charge of the Tone’s grave.

Many associations and clubs, roads, bridges, plazas,etc., in Ireland, are named in honor of Wolfe Tone.

In 1963, A music Band, The Wolfe Tones if founded in his honor. Thomas Pynchon has named a person Wolfe Tone O’Rooney in his book Against the Day.

Emily Wolfe (1892-1980) the last of the Tones in Kildare, laid flowers every year at the Tone’s grave until her death. Irish Republicans, hold an assembly at Tone’s grave in Bodenstown year after year.