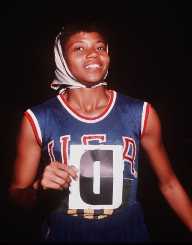 American sprinter Wilma Glodean Rudolph was born on June 23, 1940, in Saint Bethlehem, Tennessee. She was born prematurely weighting just 2 kg in the poor, racially segregated South state. She was the 20th child of her father’s 22 children from two marriages. After her birth, the family moved to Clarksville, Tennessee where she spent the rest of her childhood and attended elementary and high school. Her father Ed was a railway porter, who died in 1961. Her mother was a maid in Clarksville. As a child, Rudolph had poor health, and she often suffered from pneumonia. She also had scarlet fever and contracted infantile paralysis from poliovirus when she was four. She recovered from polio but lost strength in her left leg and foot. She had to wear a leg brace until she was eight years old.

Rudolph and her mother made weekly trips to Nashville for her treatments, and she received at-home massage treatments from her family members. By the time she was twelve, Rudolph had learned to walk without the leg brace or other support. Due to her illness, she was initially homeschooled. In 1947, she began attending Clarksville all-black Burt High School, where she began playing basketball and ran track. During her senior year of high school, Rudolph became pregnant and her first child Yolanda was born in 1958. She enrolled at Tennessee State University where she continued to compete in track. She graduated university in 1963, with a bachelor’s degree in education.

Rudolph began playing basketball in 8th grade and continued to play at high school. At High School, she began competing in track, and in her sophomore year scored 803 points, setting a school record for girls’ basketball. She was spotted by the track coach Ed Temple from Tennessee State. He knew that she is a natural athlete. Her first major track event was Alabama’s Tuskegee Institute competitions. She lost the race, but it gave her encouragement to continue competing.

Temple invited Rudolph to join the Tennessee State summer training program after she won the Amateur Athletic Union’s track meets all nine events. She continued to train regularly under Temple and was raced in several amateur athletic events with TSU’s Women’s track team.

When Rudolph was 16 years old, she attended the 1956 U.S. Olympic track and field trials in Seattle, Washington. She qualified to compete in the 200-meter individual event at the 1956 Summer Olympics in Melbourne, Australia. She became the youngest member of 1956 U.S. Olympic team. At the Olympic games, Rudolph was defeated with the heat in the 200-meter race but ran the third leg of the 4x100 m relay. She, along her relay teammates, won the bronze medal. After this, she set her mind on winning the gold medal at the 1960 Summer Olympics in Italy. In 1959, Rudolph won the silver medal in the 100 m individual event at the Pan American Games in Chicago, Illinois and the gold medal in the 4x 100m relay.

As a sophomore, Rudolph competed in the U.S. Olympic track and field team trials in Fort Worth and set the world record in the 200-meter race, which stood for eight years. She also qualified for the 100-meter race. In the 1960 Summer Olympic games in Rome, Italy, Rudolph competed in three events- the 100 meter, 200-meter sprints and the 4x100 meter relay. She won the gold medal in each of these events, becoming the first American woman to win three gold medals in a single Olympiad. During the Olympics, she was hailed as “The Tornado, the fastest woman on earth.” After the event, she became an international star.

Rudolph and her Olympic teammates competed in several events in Europe after the Olympic games, including the British Empire Games in London and meets in West Germany and the Netherlands. She also competed at the Los Angeles Invitational indoor track meet, and New York Athletic Club’s track events. She also made several media appearances, including the television game show To Tell the Truth and The Ed Sullivan Show.

Rudolph won the U.S.-Soviet meet at Stanford University in 100-meter and 4x100 relay races. She retired from track competition when she was 22 years old. She explained that she wanted to retire while at her athletic best and decided not to compete in the 1964 Summer Olympics in Tokyo, Japan. After retiring, she continued her education at Tennessee State. Later, Rudolph served as the U.S. State Department goodwill ambassador in West Africa and visited Ghana Guinea, Mali, and Upper Volta, where she attended several sporting events.

After her retirement from track, Rudolph began working as a teacher and coach. She worked at the Cobb Elementary School and coached in Burt High School. She moved several times and lived in Indiana, Saint Louis, Missouri, and Detroit. In 1977, she published her autobiography Wilma: The Story of Wilma Rudolph.

Besides her work as a teacher, Rudolph also worked with several non-profit organization and in government-sponsored projects to support athletic development among American children. She was working with the Job Corps program in Boston. In 1981, she established the Wilma Rudolph Foundation to train young athletes. In 1987 she became the DePauw University director of women’s track program.

Rudolph’s first marriage was to William Ward in 1961. He was a member of the North Carolina College Durham track team. The couple divorced in 1963. After graduation, Rudolph married Robert Eldridge, her high school sweetheart, with whom she already had a daughter. They later had three more children. Rudolph and Eldridge were married for 17 years until they divorced.

Shortly after her mother’s death in 1994, Rudolph was diagnosed with brain cancer. Before she was also diagnosed with throat cancer. Rudolph died in 1994 when she was just 54 years old.